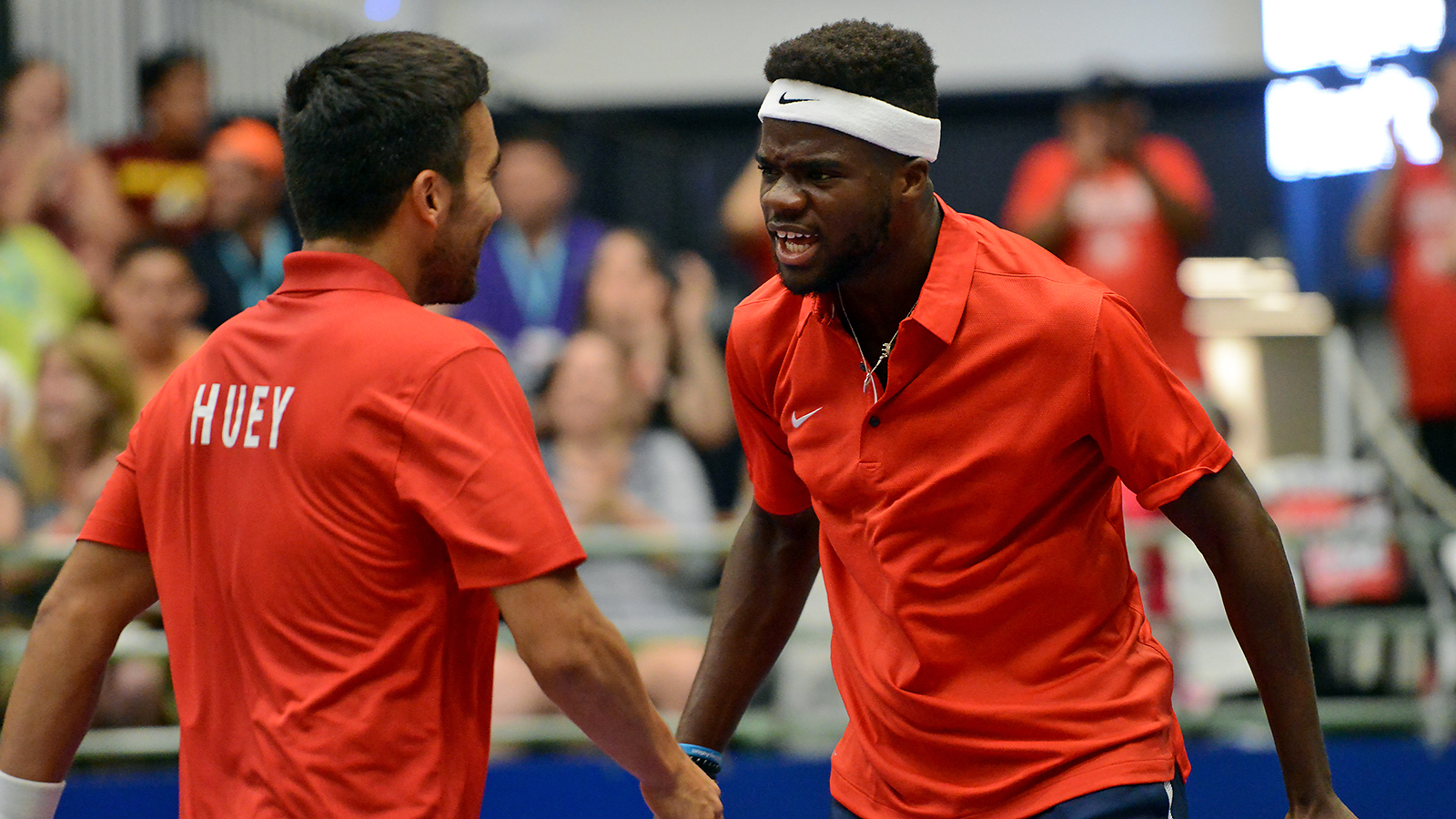 It was a lengthy but successful Mylan WTT homecoming for Frances Tiafoe, as he and his Washington Kastles teammates outlasted the New York Empire 24-23 in the longest non-weather-delayed match in Kastles history.

Maryland native Tiafoe had to struggle through the final set of the night, one game of Extended Play, and ultimately a Supertiebreaker against the Empire‘s Mardy Fish before he clinched the match with an booming unreturnable serve, which was representative of the excellence of serving between all of tonight‘s combatants.

Before Tiafoe and Fish closed out the night, four sets of tennis were played by the slimmest of margins, as each set was decided by a tiebreak.

The tone was immediately set by the opening mixed doubles, as the Kastles‘ team of Martina Hingis and Treat Huey and the Empire‘s tandem of Kirsten Flipkens and Neal Skupski all held serve for eight consecutive games with relative ease. An ace by Flipkens on set point allowed the Empire to clinch the tiebreak 5-2, and the set 5-4.

The next three sets, however, all went the Kastles‘ way. In women‘s doubles, Hingis and Anastasia Rodionova got the first break of the match for the early lead, but a crafty drop shot by Maria Sanchez quickly pulled her and Flipkens level at 2-2. They continued on to the tiebreak, and after quickly falling down 0-3, two double faults by Sanchez and an ace by Hingis on match point led to a 5-4 victory in that set.

There was more utter dominance on serve in the men‘s doubles, and Huey and Tiafoe were able to hold off Fish and Skupski in the tiebreak thanks to clutch volleying by Huey and a powerful service return on the baseline by Tiafoe on set point.

It initially appeared that the women‘s singles would break the streak of tiebreak sets. The Kastles‘ Madison Brengle took advantage of Flipkens‘ propensity for net-rushing by hitting a down-the-line passing shot to get the break in the opening game, and consolidated by lobbing Flipkens to hold for 2-0. But Flipkens‘ drop shots served her well, and she applied one to good use to break Brengle at 4-3 and send the set into another tiebreak. But Brengle raced out to a quick 3-1 lead in the tiebreak with a backhand volley winner, en route to a 5-2 tiebreak win and another set in the books for the Kastles.

The Kastles had a 19-17 lead going into Tiafoe‘s men‘s singles match against Fish, and, again, there were no breaks of serve. But a costly double fault by Tiafoe at 2-3 let Fish clinch the tiebreak 5-2 with a service winner.

With the Kastles up 23-22, the match continued into Extended Play, and Fish easily held serve to go into the Supertiebreaker with momentum. But Fish blinked first, being lulled into a lengthy rally off his serve before Tiafoe smacked an unreturnable forehand crosscourt to jump to a 5-3 lead. From there, two Tiafoe serves went unreturned, and the match went to the Kastles.

With a boisterous hometown crowd supporting his every move, Tiafoe had to plow through game after game at the end before coming out with the win. “I‘m happy to get the win for this crowd and for the city,“ Tiafoe said after the match. “Sure, there were nerves, but I‘m happy to get through it.“

TURNING POINT: Hingis, coming off her mixed doubles championship at Wimbledon on Sunday, had a good day on serve, particularly in her mixed doubles match. This paid off superbly in the women‘s doubles match, where an extremely tense tiebreak was clinched by a deep ace, and the Kastles were never behind in the match from that point forward.

NEXT ON: The Washington Kastles‘ home stand continues tomorrow night when the Orange County Breakers take on Martina Hingis and the rest of the six-time Mylan WTT champion Kastles. Follow results on WTT.com/scores or washingtonkastles.com.