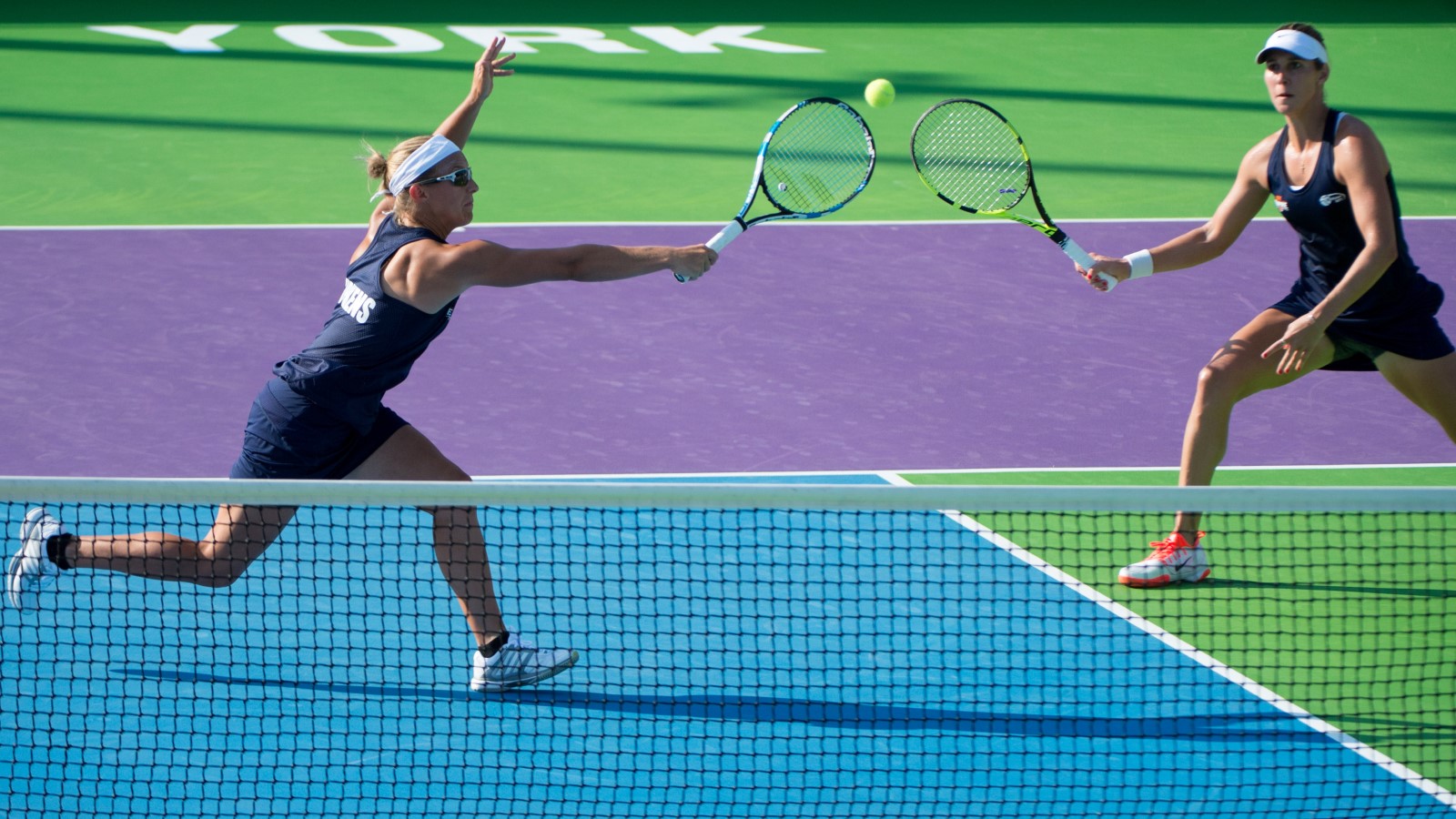 The Philadelphia Freedoms opened their 2017 home campaign on Monday hoping to gain a measure of revenge against the New York Empire, who defeated the Freedoms one night earlier.

Leading 15-11 after three sets, it appeared Philadelphia was on its way to achieving their goal. New York would have other ideas, winning the final two sets to post a dramatic 21-20 come-from-behind win in front of an enthusiastic crowd at Hagan Arena on the campus of St. Joseph‘s University.

“When you are down it‘s not easy to start the fourth set,“ said Flipkens, who was facing Sloane Stephens in women‘s singles. “I saw the score was 15-11 and I knew I had to win by four if I wanted to break even and give Mardy (Fish) a chance in the final set. If I had won 5-4 in a tiebreak I knew it would have been very difficult for Mardy.“

Picking up where she left off last night, Flipkens got off to a quick start winning the first three games including a crucial 3-3 point to take the 3-0 advantage. Leading 2-0 in the fourth game, Flipkens forced Freedoms coach Craig Kardon to pull Stephens off in favor of Taylor Townsend. Townsend would win just one game as Flipkens would duplicate her performance from one-night earlier once again posting a 5-1 win.

With New York leading 16-15 entering the fifth and final set, the Freedoms‘ Donald Young (currently ranked No. 50 on the ATP Tour) and Mardy Fish took the court to decide the match. The crowd at the new home of the Freedoms was into the match as the pair delighted the crowd with an array of winners from the baseline and the net.

With the final set level at 3-3, Young hit a perfectly placed touch volley to close out the game and take a 4-3 lead. Fish would fight back to win the next game and even the match at 4-4 setting up a tiebreak to decide the match. In the tiebreak, Fish outlasted Young 5-3 to earn the 5-4 win and give his team the victory.

Philadelphia started the evening on a high note with Donald Young and Fabrice Martin posting a thrilling 5-4 win over Neal Skupski and Fish. Leading 4-2 in the tiebreak, Skupski rallied his team back to 4-4 before Martin closed out the set with a backhand half-volley for the winner.

The Freedoms continued their hot start as Townsend and Stephens teamed up to defeat Flipkens and Maria Sanchez in women‘s doubles before Townsend and Martin closed the first half of action posting a 5-4 mixed doubles win over Skupski and Flipkens.

“Getting off to the fast start was great,“ said Freedoms coach Craig Kardon. “We did really well with 3-3 points but we really need to fix the problem we are having with women‘s singles. Whatever we are doing now is not working.“

Turning Point: With Philadelphia leading 15-11 after three sets, New York‘s Kirsten Flipkens posted a 5-1 win in women‘s singles to give her team a 16-15 lead. Her victory set up Mardy Fish to complete the dramatic comeback.

Next On: The Freedoms travel back to New York and face Mardy Fish and the Empire again on Wednesday, July 19, at 7 pm at the USTA Billie Jean King Tennis Center. Follow results on WTT.com/scores or www.philadelphiafreedoms.com.