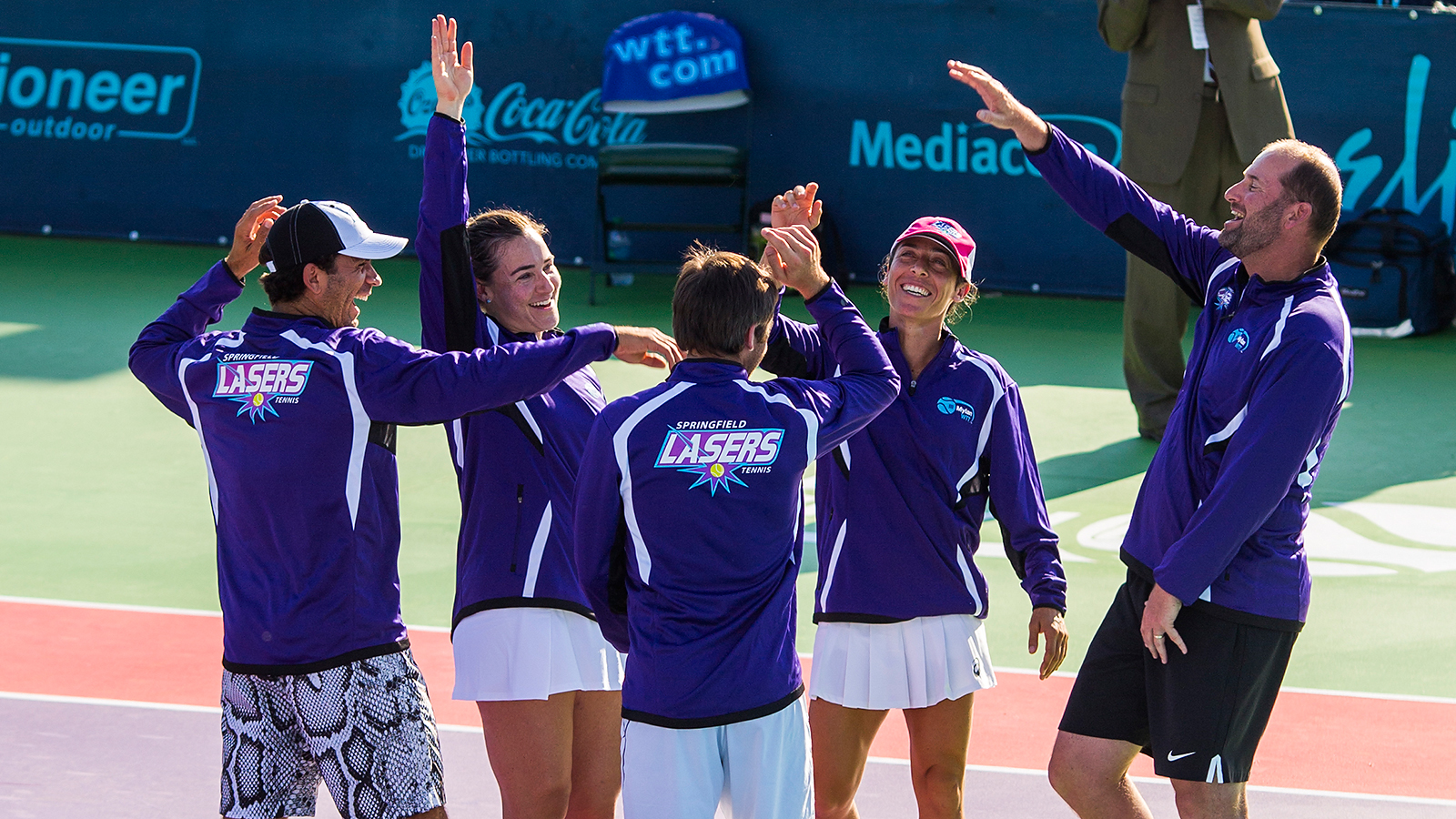 Francesca Schiavone made her Mylan WTT debut for the Springfield Lasers. Frances Tiafoe made his debut for the Washington Kastles. She won, he lost as the Lasers opened the season with a 24-20 win in Extended Play.

Tiafoe made Springfield‘s Benjamin Becker work for his 5-4 win in men‘s singles. The 19-year-old American took the first game, then ÔÇô after Becker took two in a row ÔÇô he rallied to tie the set at 2, 3 and 4. But Becker took the tiebreak 5-2 to get the Lasers off to a winning start in the match.

Among the points Tiafoe dropped was a let serve that he didn‘t charge. Let serves are playable in WTT.

“It was great out there tonight. It‘s definitely different,“ Tiafoe said. “That let went by and I just stopped. That usually happens and play stops. But I‘m going to be used to it on Tuesday (against the New York Empire). I‘m happy to be part of the team and I‘m excited to play in D.C. next week.“

Washington coach Murphy Jensen is happy Tiafoe‘s part of the team, too.

“I thought he did well for his first night in World Team Tennis. The conditions were a little tough,“ Jensen said. “They were a lot faster than we expected and we got off to a slow start. But there are a lot of matches ahead of us and if we just do what we do, we‘re going to be OK.“

Then it was Schiavone‘s turn to debut. She topped Madison Brengle 5-3 in women‘s singles. Brengle took the opening point in each of the first three games and led 2-1. But Schiavone, from Italy, took three of the next four games to take the win.

“The court is very fast, so it‘s not easy,“ Schiavone said. “The surface balances the level of play. But I enjoyed it. It was a good fight. There‘s a lot of energy in World TeamTennis. When you‘re on the court it‘s fantastic.“

Becker and Jean-Julien Rojer were dominant in men‘s doubles, taking the first two games and cruising to a 5-2 win. Brengle and Anastasia Rodionova raced out to a 4-1 lead in women‘s doubles, but Schiavone and Abigail Spears rallied to force a tiebreaker before falling 5-4, leaving Springfield in front 19-14 heading into mixed doubles.

“I was very happy with the way Francesca played in her first game in World Team Tennis,“ Springfield coach John-Laffnie de Jager said. “It was hard for her because she likes a slower surface. When they went down 4-1, I thought to myself if they could get three games in women‘s doubles it would help us a lot. Obviously they turned things around.“

Those points proved big as Rodionova and Treat Huey clipped Rojer and Spears 5-4 in a mixed doubles thriller to force Extended Play. Huey held serve for Washington, but so did Spears, with Rojer hitting a clever shot as he charged the net to seal the win.

“Everybody chipped in well,“ de Jager said. “We‘re very happy. It‘s always good to get off to a winning start because everyone‘s nervous and everyone‘s rusty with the format. If you can get the win the first night, it‘s always helpful going into your second night.“

TURNING POINT: Schiavone smashed home the deciding point at the net, keeping the Lasers alive in women‘s doubles. Schiavone and Spears won the next two games to stop Washington‘s momentum and give the Lasers a big lead heading into the final set.

NEXT ON: The Lasers hit the road for the first time in 2017, visiting the Orange County Breakers Monday at 8:05 p.m. Central/6:05 Pacific. American Steve Johnson joins the Breakers for the first of his four wildcard appearances this season. He won the U.S. Men‘s Clay Court Championship in Houston April 16. Follow results on WTT.com/livescores or springfieldlasers.com.