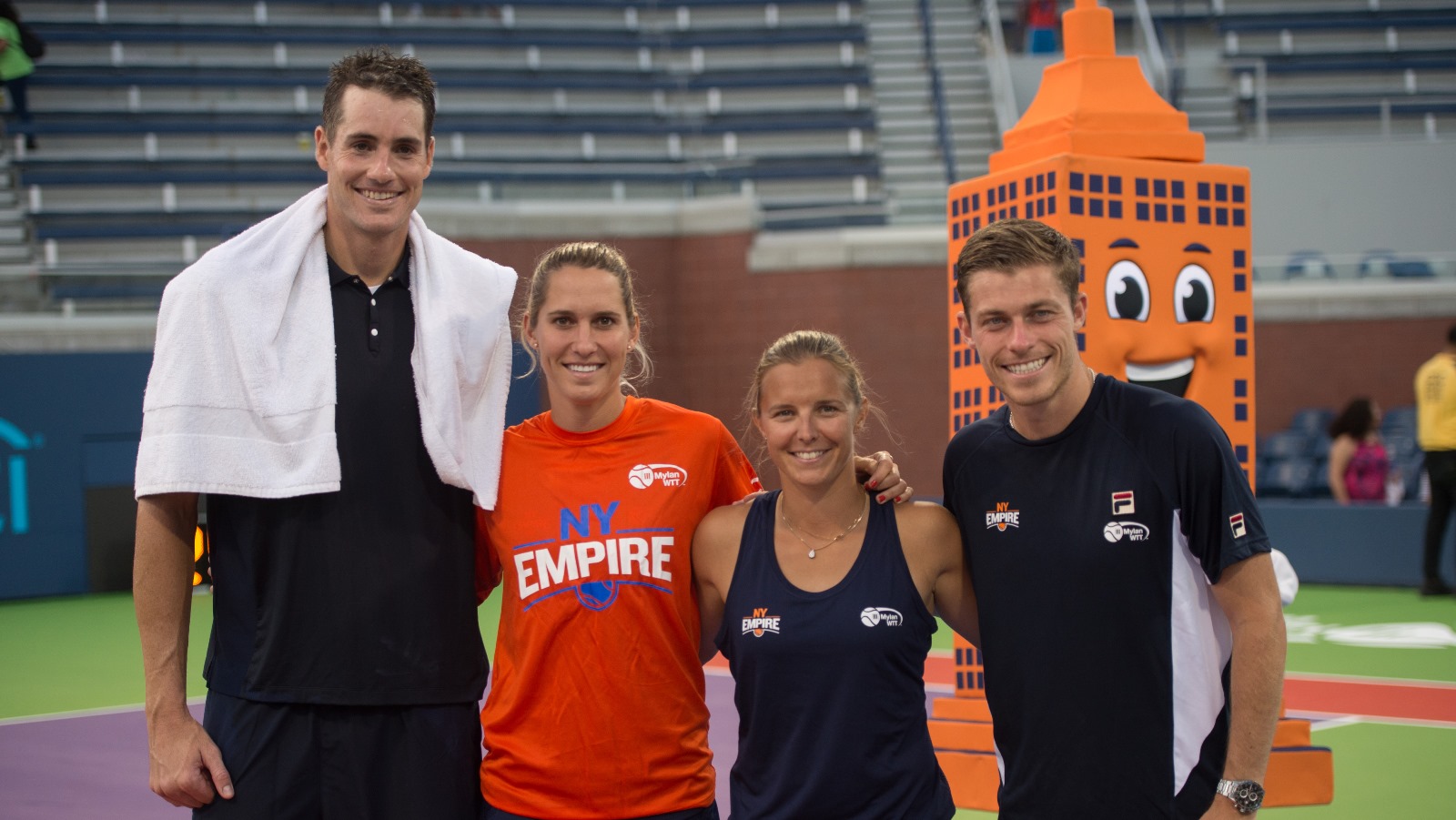 Not only did her team score a come-from-behind victory to open the 2017 season, but it all – well, most of it – went according to her pre-match plan.

“[The match] worked out as I was hoping ÔÇö that it would come down to men‘s singles and we had John ÔÇö but it was a great team effort and everyone contributed in some way and it’s fun to start out with a win.“

With a 5-2 win over the Philadelphia Freedoms‘ Donald Young in the final set of the evening, ATP World No. 21 and marquee player John Isner clinched a 20-18 win for the Empire on home court at the USTA Billie Jean King National Tennis Center on Sunday night.

As captains get to choose the order of events prior to the start of a Mylan WTT match, Fernandez saved her ace in the hole for when she needed it most ÔÇö and it worked out well for the home team, who snuck away with a victory despite losing three of the five events overall.

The singles proved crucial for the Empire in its season-opener, as rookie Kirsten Flipkens also contributed a 5-1 victory over Philadelphia‘s Sloane Stephens in the second set of the evening. The Belgian was clutch when she needed to be, as she won both games that went to deciding 3-3 points, and saved the lone break point that Stephens created for the Freedoms in the set.

“It‘s a great atmosphere, and there‘s no better place in America that we could be playing [in] than here [in New York.]“

Around Flipkens‘ victory, the Freedoms scored 5-3 wins in both women‘s and mixed doubles, as Sloane Stephens and Taylor Townsend opened with a win over Flipkens and Maria Sanchez. With the visitors trailing, Townsend teamed with 2016 Mylan WTT Male Rookie of the Year Fabrice Martin to defeat Flipkens and Isner to ensure the score was tied, 11-11, at halftime.

Out of the break, Young and Martin edged Isner and Neal Skupski in a tiebreak ÔÇö after the Empire duo had rallied from a break down in the set ÔÇö giving the visiting team a 16-15 lead headed to the final event.

“I don‘t feel like I played doubles that well,“ Isner said. “I feel like I let Kirsten down in the mixed doubles and in the men‘s doubles, I feel like I Neal down a little bit. I‘m definitely more comfortable on the singles court, so it was good that we were only down one game with me starting to serve ÔÇö so the way I looked at it, we were virtually even. I went out and played a very good singles match.

“[Donald] is a good friend – we‘re going to laugh about this in the locker room. He‘s a great guy, a great player ÔÇö he beat me earlier this year [on tour], so I had a little revenge on my mind. All of us enjoy [Mylan WTT] so much. It‘s very different from what we do on the regular tour ÔÇö it‘s a very different atmosphere, a different setting, which I think is a nice break from that normalcy, so for me, I enjoy it.“

While the format of Mylan WTT might be different than tour tennis for Isner, there was one aspect of the game that was quite normal for him in the Empire‘s victory: dominance on serve.

Isner won 80 percent of the points played behind his big first delivery in the deciding men‘s singles set – and dropped just five points total in his service games to help clinch the match.

With the win, New York opens the season at 1-0 ÔÇö halfway to its entire win total from a season ago ÔÇö but with almost an entire roster of new faces, Fernandez looks to take 2017 one night at a time.

“It‘s a new year, a new [team], so it‘s hard to compare,“ Fernandez said. “We have a great atmosphere here, we have a different setup. If the players practice well, they come out and perform ÔÇö and it‘s all about performing, putting it out there, competing and seeing if you can pull out a win like we did today.“