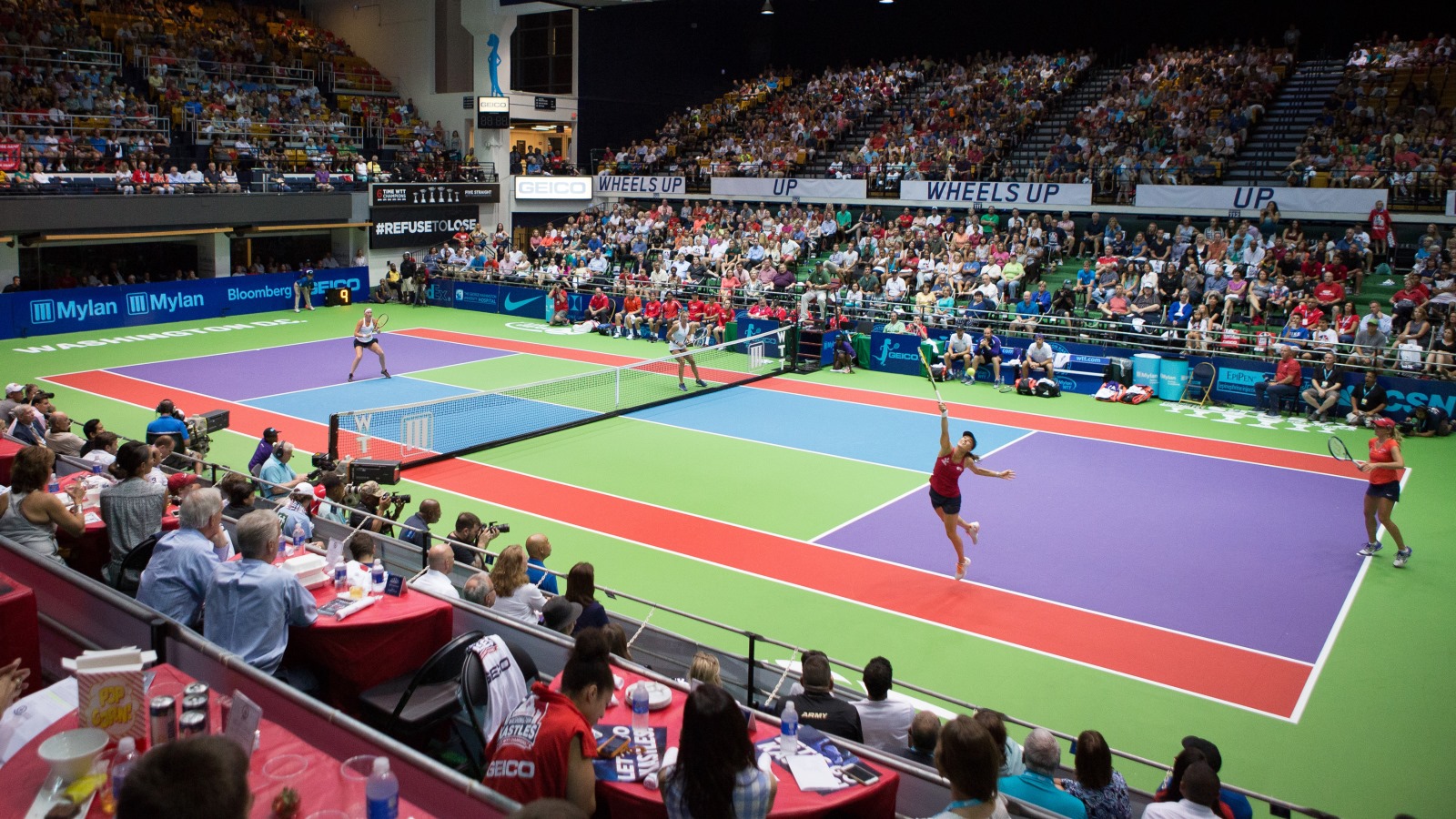 The old saying goes that ÔÇÿThe more things change, the more they stay the same‘ – and that couldn‘t be more true for Mylan World TeamTennis as the league enters its 42nd season beginning on Sunday.

For the first time since its inception, league co-founder Billie Jean King will not be its majority owner, having sold her stake to Washington Kastles owner Mark Ein and San Diego Aviators owner Fred Luddy earlier this year. She retains her minority stake in WTT and is the majority owner of the Philadelphia Freedoms, one of the league‘s six teams.

“It‘s an almost indescribable honor, but it is also a really heavy obligation to take a big part of [King‘s] life‘s work and take it into the future,“ Ein said in March. “But I know that‘s something that both Fred and I are excited about, we‘re relishing it, we‘re excited to do it and I know that together we‘re going to make this even bigger and better as we go forward.“

The league‘s 42nd season begins in unfamiliar territory on the court as well – at least in its recent history – as a team other than the Washington Kastles begins as defending champions.

The San Diego Aviators won their first league title last season over the Orange County Breakers, 25-14, and return their entire championship roster for the first four matches of the season as they look to set the tone for their title defense.

Coach John Lloyd will welcome back 2016 Mylan WTT Male MVP Ryan Harrison, Darija Jurak, Raven Klaasen and Shelby Rogers for the 2017 season, alongside newcomer Rajeev Ram and substitute Naomi Broady, as the team tries to become the first West Coast-based team to repeat as champions since the Sacramento Capitals won four straight from 1997-2000.

Orange County and the Springfield Lasers will look to knock the Aviators off their perch with squads that are largely new to the league, with 11 of the 13 players signed up for the two clubs having less than five seasons of service – along with four rookies.

Orange County sees former US Open semifinalist Yanina Wickmayer and former LSU Tiger Ken Skupski teaming up alongside hometown favorite Steve Johnson, 2015 Mylan WTT Male MVP Teymuraz Gabashvili, Andreja Klepac and last season‘s Female MVP Nicole Gibbs, who will play a limited role this season as a substitute. In addition, Maria Sharapova returns to the Mylan WTT courts for the first time in seven years, as she suits up for two matches this season. The five-time Grand Slam champion has played with Orange County in seven seasons, after making her WTT debut as a 15-year-old in 2002 with the Delaware Smash.

The Springfield Lasers have reached five Mylan WTT Finals without raising the King Trophy, and look to get back into contention this summer after back-to-back runner-up finishes in 2013-14. Kansas resident Jack Sock, the top-ranked American on the ATP Tour, makes his Mylan WTT debut this season. He is joined on the Lasers‘ roster by Anna-Lena Groenefeld, Jean-Julien Rojer, Benjamin Becker, Sorana Cirstea, Abigail Spears and former French Open champion Francesca Schiavone.

In the East, the Kastles will look to return to the promised land with a roster full of players who‘ve donned Kastle red and blue en route to their record-tying six Mylan WTT league titles. Bob Bryan, Mike Bryan, Martina Hingis and the timeless Venus Williams – all of whom have over of a decade of Mylan WTT playing experience – will again take the court for Washington at points during the season, along with familiar Kastles favorites Anastasia Rodionova (2015 Mylan WTT Female Co-MVP); Madison Brengle, who clinched the final point in the 2015 Mylan WTT Finals; 2017 Wimbledon semifinalist Sam Querrey, Nick Kyrgios, Treat Huey and Sam Groth.

Joining the team for their Mylan WTT debut are former ATP doubles No. 2 Bruno Soares and rising American teenager Frances Tiafoe. Tiafoe‘s fans will get a chance to see him in action up close at Kastles Stadium at the Smith Center at George Washington University, as the home of the Kastles is just 30 minutes from his hometown of Hyattsville, Md.

The second season of the New York Empire brings a new look from a season ago, starting in the captain‘s chair. Former world No. 1 and 17-time Grand Slam doubles champion Gigi Fernandez will make her Mylan WTT coaching debut, and she‘ll lead a team that sees just one returning player from last year‘s roster – former Mylan WTT Male Rookie of the Year Neal Skupski. The Empire‘s lineup also includes former world No. 13 Kirsten Flipkens, Maria Sanchez and Marcus Willis. John Isner, Eugenie Bouchard and Mardy Fish are slated to be marquee players for the Empire. The league‘s youngest franchise also gets a new home for its second season, as they‘ll play on Court 17 at the USTA Billie Jean King National Tennis Center in Flushing.

Rounding out the teams on the East Coast is King‘s flagship squad, the Philadelphia Freedoms. The Freedoms haven‘t reached the Mylan WTT Finals since 2006 – the year of their last title – and will be looking to do it this season behind the efforts of Andy Roddick, Sloane Stephens, rookie Darian King, Taylor Townsend, Fabrice Martin, Donald Young and Kveta Peschke. Stephens will play 11 matches for the Freedoms as she comes back from nine months on the sidelines following foot surgery – having made her return to competitive tennis at Wimbledon.

“Being able to play with my really good friends, I think that‘ll make it even more enjoyable for me,“ Stephens said in June. “At this point, I‘m just looking forward to getting on the court, no matter where it is. I think this will be a way to start my comeback and get to Philadelphia and play for Billie Jean.“

The 2017 Mylan World TeamTennis season runs from July 16 – Aug. 2, with the top two teams advancing to the Finals at the Omni La Costa Resort and Spa in Carlsbad, Calif., on Saturday, Aug. 5 at 8 pm PT.