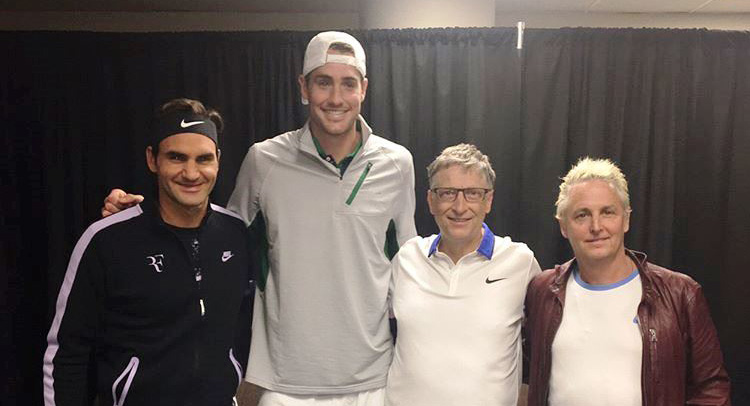 This week‘s Mylan WTT Family MVP was selected for his contributions off the court. New York Empire star John Isner helped global superstar Roger Federer raise more than $2 million at the Match For Africa 4 in Seattle this past Saturday.

Benefitting the Roger Federer Foundation, the exhibition was hosted in front of a sold out crowd at Key Arena. Federer and Isner first faced each other in a special doubles match. Microsoft founder Bill Gates, a native of Seattle, joined Federer while Pearl Jam lead guitarist Mike McCready teamed up with Isner. The 18-time Grand Slam champion Federer and Gates edged Isner and McCready 6-4 before the Swiss and American squared off in the evening‘s marquee matchup. The two played a close contest, but Federer ultimately prevailed 6-4, 7-6(7). Charity was the biggest winner of the night and Isner was privileged to assist with Federer‘s initiative.

“The crowd was amazing,“ Isner said on-court afterwards to the announced crowd of 16,000. “It’s been a huge honor for me. Again, I can’t thank you enough Roger. I appreciate itÔÇª this was an absolute blast.“

Isner will play his seventh season of Mylan WTT this summer when he makes his debut for the Empire on Sunday, July 16. Tickets are on sale now.

On the court, Madison Brengle (Washington Kastles) was triumphant at the Tinsley Classic in Charlottesville, Va. Brengle, the top seed, defeated Caroline Dolehide 6-3, 6-4 to win the USTA Challenger event. She also reached the doubles final alongside Danielle Rose Collins.