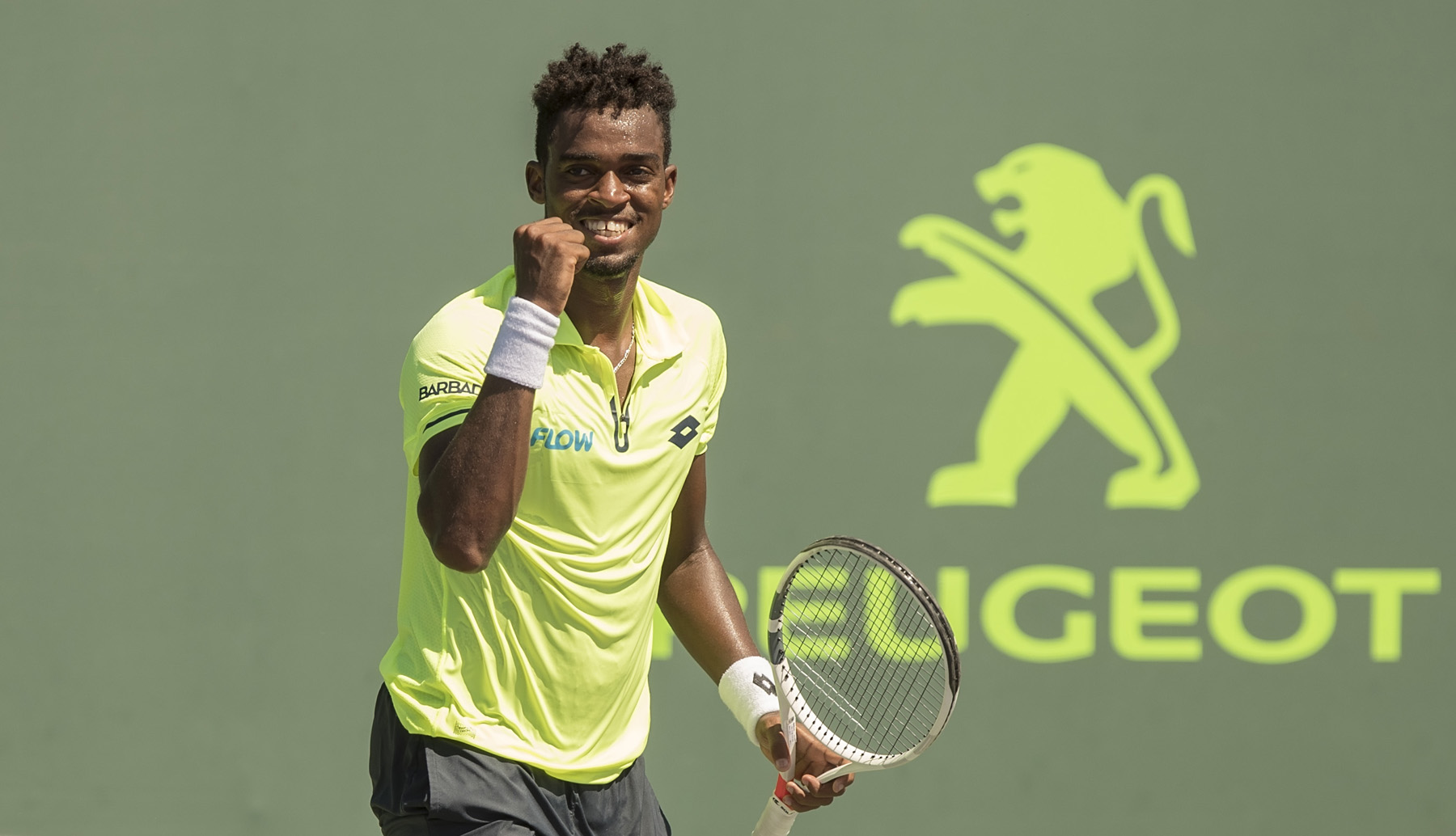 Darian King, a rising star on the ATP World Tour and the highest-ranked player ever from Barbados, was selected by the Philadelphia Freedoms as the top overall pick in today‘s Mylan WTT Roster Draft in Indian Wells, Calif.

Four Top 20 doubles standouts filled roster spots on the league‘s six teams during the 2017 Draft. World No. 8 Bruno Soares will play for the Washington Kastles; Raven Klaasen (world No. 13) returns to the defending champion San Diego Aviators with his regular ATP Tour doubles partner Rajeev Ram (world No. 14); and former Mylan WTT MVP Jean-Julien Rojer (world No. 20) is back with the Springfield Lasers for the first time since his 2013 MVP season.

A team-by-team breakdown of the 2017 Mylan WTT Roster Draft:

With their first pick in the 2017 Mylan WTT Roster draft, the New York Empire selected Kirsten Flipkens, who will take to WTT‘s multi-colored court for the first time. A former world No. 13 and Wimbledon semifinalist, Flipkens has 13 years of Fed Cup service for Belgium. The Empire next selected Maria Sanchez, a former University of Southern California standout will play her fourth season of WTT. With their third pick, the Empire brought back Guido Pella. After debuting last year, the Argentine competed at the 2016 Olympics and then helped his country win its first Davis Cup in team history last November. Last month the Empire also picked up marquee players Eugenie Bouchard, Mardy Fish and John Isner on their roster. International Tennis Hall of Famer Gigi Fernandez will coach the New York Empire.

The Breakers selected Mylan WTT newcomer Yanina Wickmayer with their first round pick. The Belgian is a former world No. 12 and US Open semifinalist, and has won five WTA singles titles and two doubles crowns. In the second round, the Breakers picked up Michael Venus, who brings a strong team tennis background to the table through his NCAA and Davis Cup experience. With their third pick, the Breakers selected four-time WTA doubles titlist Andrea Klepac. The Slovenian featured in WTT action for the first time last year with Washington. With their final selection, the Breakers protected 2015 Mylan WTT Male MVP Teymuraz Gabashvili. The Russian has twice reached the fourth round at Roland Garros and represented his country at the 2016 Olympics. The Breakers will once again be coached by Rick Leach, the Mylan WTT Coach of the Year two seasons ago.

Philadelphia traded up in a deal with New York to make the first overall selection in the draft. With that pick, the Freedoms drafted fast-rising league rookie Darian King, a 24-year-old native of Bridgetown, Barbados. Also taking place in the first round, the Freedoms protected Taylor Townsend. This will be her fourth overall season in the League and third with Philadelphia. The Freedoms welcomed back last season‘s Mylan WTT Male Rookie of the Year Fabrice Martin by protecting their rights to the Frenchman in the third round. Martin has won four ATP doubles title, which includes a title in Doha earlier this year. Completing their roster, the Freedoms brought back Donald Young with a fifth round protection. Young has twice advanced to the round of 16 at the US Open and has Davis Cup experience with Team USA. Last month the Freedoms also picked up marquee players Andy Roddick and Sloane Stephens on their roster.

The defending Mylan WTT champion San Diego Aviators remains greatly intact after the team brought back three of their four championship team members. With a protection in the first round, the Aviators selected Shelby Rogers, who made an incredible run to the quarterfinals of the 2016 French Open with wins over Karolina Pliskova and Petra Kvitova. With their second pick, the Aviators protected doubles standout Raven Klaasen, the reigning Mylan WTT Finals MVP. Klaasen, a past Australian Open finalist and Wimbledon semifinalist, holds 12 ATP doubles titles. In the third round, the Aviators drafted Klaasen‘s partner Rajeev Ram, the mixed doubles silver medalist at the 2016 Rio Olympics with Venus Williams. Ram has triumphed in singles twice at the ATP event in Newport and also owns 11 Tour-level doubles titles. The Aviators also protected doubles specialist Darija Jurak. The Croatian, playing her third consecutive season with San Diego, is coming off a doubles title in Acapulco and achieved a career-high ranking of No. 27 in February. The team returns last year‘s Mylan WTT Coach of the Year John Lloyd.

With the second overall pick, the Lasers selected Jean-Julien Rojer, a former league MVP and Rookie of the Year. In 2015, Rojer captured titles at Wimbledon and the year-end ATP World Tour Finals before later reaching No. 3 in the world. In the second round, the Lasers drafted exciting Russian talent Daria Kasatkina. A 2016 Olympian, Kasatkina asserted herself last year on the WTA Tour with a number of impressive wins, including top 10 victories over Venus Williams and Roberta Vinci. The team selected Benjamin Becker with their third pick, bringing the former world No. 35 back to the city for the second successive year. Becker may be best remembered for defeating Andre Agassi in the final match of his career. With their fourth pick, the Lasers selected Michaela Krajicek, the 2016 Mylan WTT Female Rookie of the Year. Krajicek is a two-time Grand Slam doubles semifinalist and winner of three WTA singles titles. Last month the Lasers also added Jack Sock as a marquee player on their roster. Three-time Mylan WTT Coach of the Year John-Laffnie de Jager will once again be at the helm for the Lasers.

The Washington Kastles brought back a number of familiar faces and added a new name to their roster. In the first round, the team protected Sam Querrey, who‘s playing in his fifth season and second with Washington. Having defeated Novak Djokovic at Wimbledon in 2016, Querrey recently won his biggest title to date in Acapulco by defeating four Top 20 players, including Rafael Nadal in the final. The Kastles next selected WTT rookie Bruno Soares with their second pick. The Brazilian, currently the ATP‘s eighth-ranked doubles player, has won five Grand Slam doubles titles with three coming in mixed doubles. The Kastles then protected Madison Brengle in the third round. Set to play her fifth season and third in a row with Washington, Brengle notably clinched the final point in the 2015 Mylan WTT Finals to secure the team‘s fifth consecutive title. The team rounded out their roster by protecting team stalwart Anastasia Rodionova. The 2015 Mylan WTT Female Co-MVP and winner of 11 WTA doubles crowns, Rodionova will compete in her sixth straight season with the Kastles and ninth overall. Last month the Kastles added marquee players Bob and Mike Bryan, Martina Hingis and Venus Williams to their roster. Three-time Mylan WTT Coach of the Year Murphy Jensen returns to the helm.

Team-by-team look at each of the team‘s full roster (in alphabetical order), including their coach:

*The New York Empire traded their 1st round pick to the Philadelphia Freedoms for the Freedoms’ 2nd round pick and financial consideration.

Mylan World TeamTennis showcases the best in professional tennis with the innovative team format co-founded by Billie Jean King in the 1970s. Recognized as the leader in professional team tennis competition, Mylan WTT features many of the world‘s best players competing annually for the King Trophy, the league‘s championship trophy named after King. In July 2015, Mylan WTT became the fifth major professional team sports league in the U.S. to reach the 40th season milestone. In 2017, team owners Mark Ein and Fred Luddy acquired majority ownership of the organization. The 2017 season of Mylan WTT presented by GEICO runs July 16-August 5. On the recreational side of the sport, the Mylan WTT Recreational League operates team leagues and events, providing grassroots programming throughout the year. For more information, visit www.WTT.com.