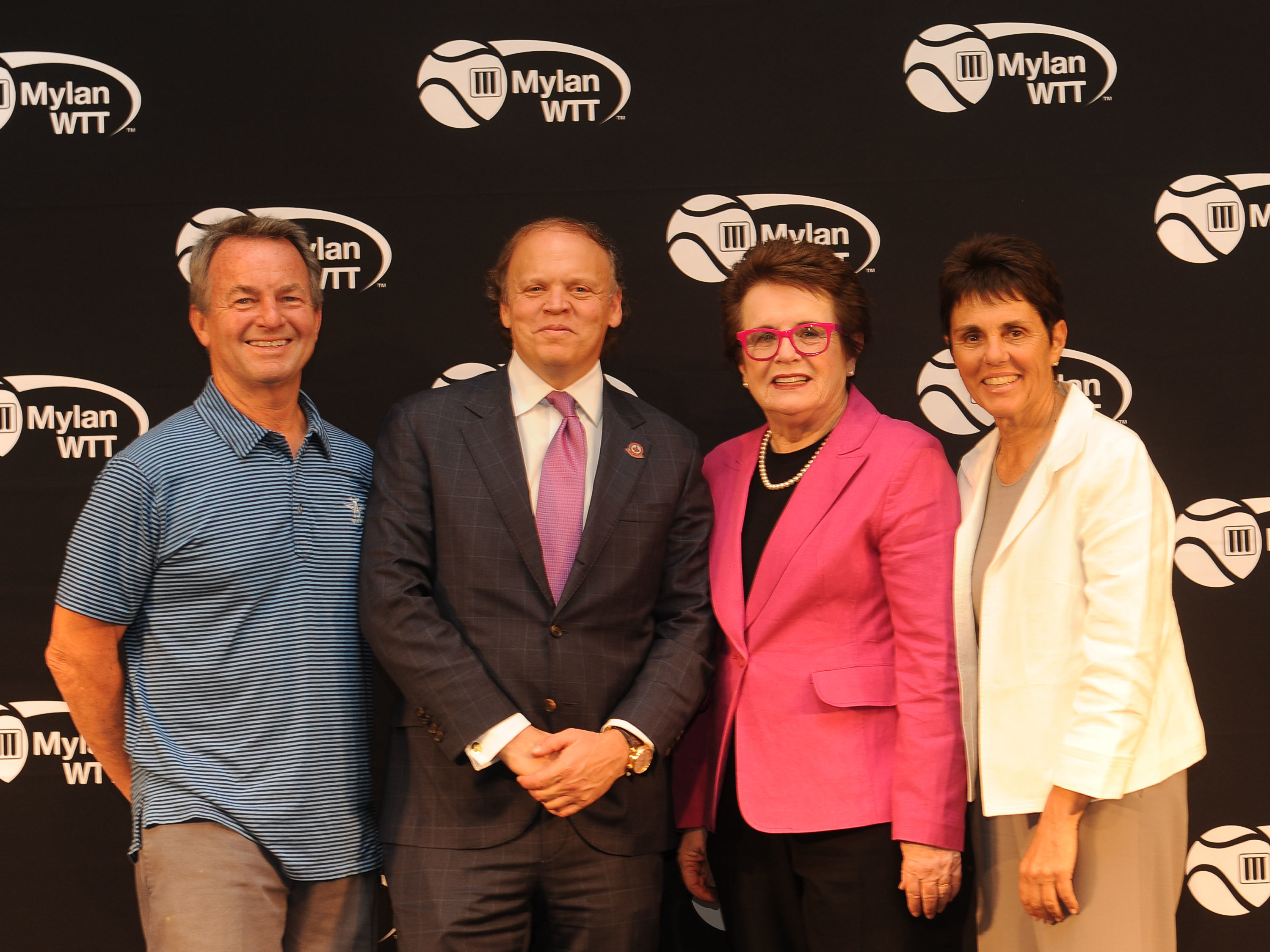 Mylan World TeamTennis (WTT) announced today that the league‘s co-founder and sports icon Billie Jean King sold her majority ownership of the world-renowned sports organization to Mark Ein, founder and owner of the Washington Kastles, and Fred Luddy, owner of the San Diego Aviators. King will retain a minority stake in WTT and continue as the majority owner of the Philadelphia Freedoms franchise. Mark Ein will become Chairman of WTT and Ilana Kloss will remain in her position as CEO and Commissioner through 2017.

The new ownership group will leverage their entrepreneurial success and experience building two of the WTT‘s leading franchises to create compelling growth opportunities for the league and its partners. Ein and Luddy plan to invest in the league‘s platform and expand franchises nationally, bringing great tennis to fans and audiences in key major markets across the country. As a part of the transaction, LionTree Partners, the merchant banking arm of LionTree LLC, has invested in WTT alongside Ein and Luddy. LionTree will assist in attracting new franchise owners, consummating new media partnerships and forming new league sponsorship relationships.

“After 42 seasons of World TeamTennis, Ilana (Kloss) and I feel this is the time to pass the baton to Mark Ein and Fred Luddy, and entrust the legacy of WTT as an innovative force in tennis to them and their team,“ said King. “I will continue to be part of the league as a minority owner and as the owner of the Philadelphia Freedoms, and I am confident the league will continue to grow and prosper under Mark and Fred‘s leadership.“

“Owning and building the Kastles has been one of the most meaningful experiences of my life. The success we have enjoyed on and off the court will provide a template for how we can grow WTT across America with other like-minded owners that love tennis, want to make a profound impact in their communities and have the same opportunity of a lifetime that we have enjoyed. Succeeding a pioneer like Billie Jean King is an incredible honor and Fred and I are committed to significantly growing and building WTT 2.0 to thrill a new era of fans,“ said Mark Ein.

Ein, founder and CEO of Venturehouse Group, LLC, a successful investor, company builder and philanthropist, founded the Washington Kastles in February of 2008. The Kastles have captured a league-leading six WTT championships, including five consecutively from 2011-2015, and have become a well-established sports franchise in the greater Washington, D.C. market with a significant fan base. Luddy, who founded the enterprise cloud company ServiceNow (NYSE:NOW) and serves as a Board Member, became the majority owner of the San Diego Aviators in 2015 and led the franchise to its first championship in 2016. Combined, Ein and Luddy have captured a total of seven championships over the past nine seasons.

“This is such a fabulous product, some of the best men and women players in the world forming a team combined with a forward-thinking scoring system and high energy atmosphere, the opportunity for growth is phenomenal,“ said Fred Luddy. “We look forward to building on this wonderful legacy.“

“We‘re excited to participate in such a distinctive sports opportunity,“ said Aryeh B. Bourkoff, Founder and Chief Executive Officer of LionTree LLC. “WTT has an innovative and engaging approach to professional tennis that has the ability to appeal to a broad set of fans across media platforms. We‘re looking forward to working with Mark, Fred, Billie Jean King and the team, leveraging our capabilities to move WTT into new markets and develop attractive partnerships.“

The league has also been recognized for showcasing and introducing pioneering elements to professional tennis including the service clock, instant replay, cumulative and no-ad scoring, on-court coaching and timeouts, teams featuring men and women in equal roles, Extended Play and Supertiebreakers, multi-colored courts and player names on the back of their shirts.

The 2017 season of Mylan WTT presented by GEICO, which runs July 16 – August 5 in six U.S. markets, continues the tradition of presenting world-class talent with a player lineup that includes Venus Williams, Hingis, Roddick, Bob and Mike Bryan, Sloane Stephens, John Isner, Jack Sock, Mardy Fish and Eugenie Bouchard. By the time the league completes its 42nd season with the Mylan WTT Finals on August 5, more than 900 professional tennis players from across the world will have competed in WTT action. Team lineups will be finalized at the Mylan WTT Roster Draft on Tuesday, March 14 in Indian Wells, Calif.

The agreement includes the Mylan WTT Recreational League which provides grassroots outreach and support in the league‘s team communities throughout the year. Since the WTT Recreational League started in 1985, more than 1 million tennis players of all ages and abilities have participated in Mylan WTT Rec League events and grassroots programs featuring the WTT team format. Mylan WTT Rec Leagues have been played in more than 1,000 venues, including parks, schools, military bases and tennis facilities throughout the U.S. The Mylan WTT Recreational League is involved in more than 40 grassroots events annually, including Mylan WTT National Qualifiers and Nationals for adult league players, the WTT Junior Nationals invitational event for ages 14-18, and the Tennis on Campus program which uses the WTT format for sectional and national college sport club competitions. Aligning with the professional Mylan WTT team markets, the Rec League has also introduced 12 & Under TeamTennis Circuits, youth PlayDays and clinics, and high school recognition programs. Over the past decade, WTT and team franchises have distributed more than 300,000 free junior racquets at matches, PlayDays and other special events.

LionTree Advisors and Latham & Watkins served as advisors to Mark Ein for the transaction.

About Mylan World TeamTennis (WTT):
Mylan World TeamTennis showcases the best in professional tennis with the innovative team format co-founded by Billie Jean King in the 1970s. Recognized as the leader in professional team tennis competition, Mylan WTT features many of the world‘s best players competing annually for the King Trophy, the league‘s championship trophy named after King. In July 2015, Mylan WTT became the fifth major professional team sports league in the U.S. to reach the 40th season milestone. In 2017, team owners Mark Ein and Fred Luddy acquired majority ownership of the organization. The 2017 season of Mylan WTT presented by GEICO runs July 16-August 5. On the recreational side of the sport, the Mylan WTT Recreational League operates team leagues and events, providing grassroots programming throughout the year. For more information, visit www.WTT.com.

ABOUT LIONTREE
LionTree is a differentiated global investment and merchant banking firm focused on media, technology, and telecommunications. Founded in 2012 by CEO Aryeh B. Bourkoff, LionTree works across offices in New York, San Francisco, London and Paris to serve clients on transactions across the globe. The Firm leverages its unique insight and relationships across its integrated Client Advocacy, Merchant Banking, Institutional Investor Membership (IIM) and LT Growth focus areas to connect clients with the tailored ideas, actionable opportunities and resources that drive results. Since its formation, the Firm has advised on over $300 billion of transactions that have shaped the industry.