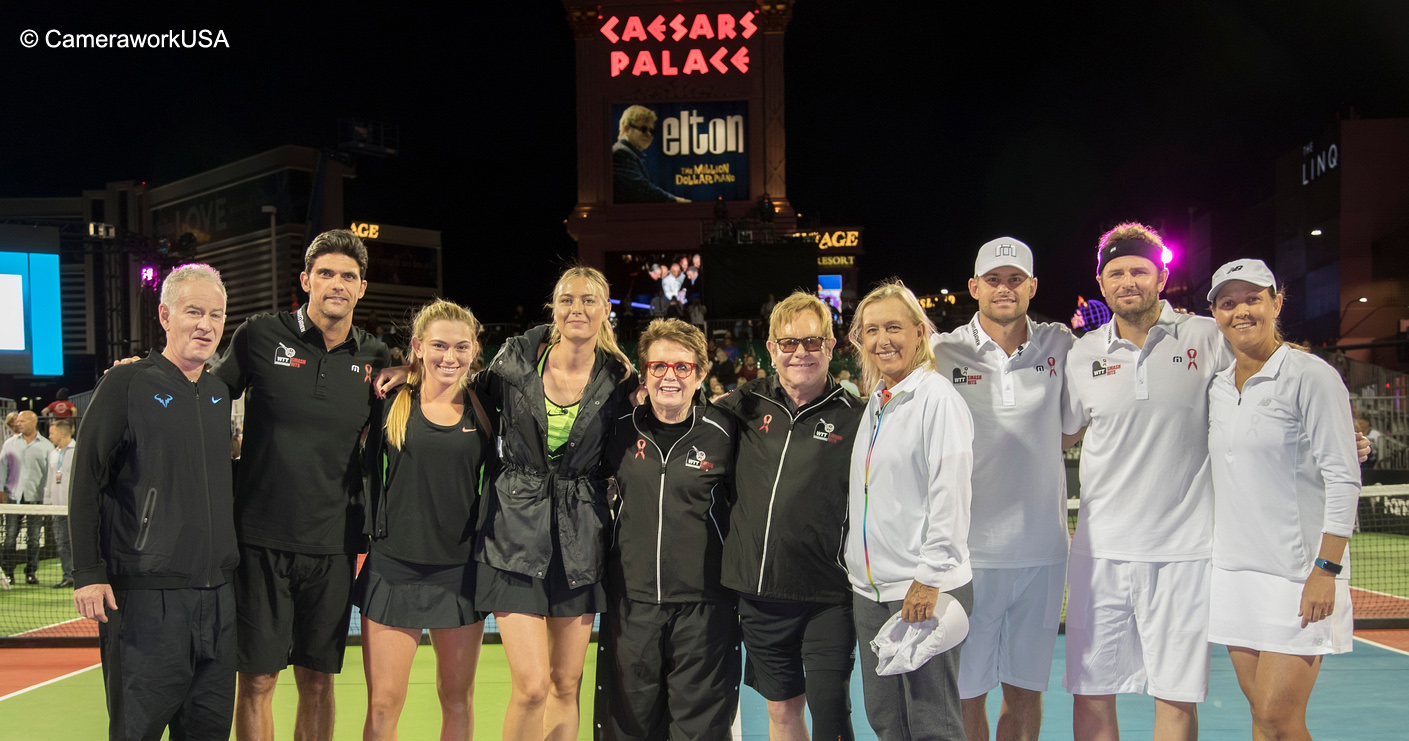 Charity is always the biggest winner at the WTT Smash Hits presented by Citi event, with some of tennis‘ big stars turning out to raise more than $600,000 for the Elton John AIDS Foundation at Caesars Palace in Las Vegas on Monday night.

The 2016 edition of Sir Elton John and Billie Jean King‘s annual charity tennis pushed the 24-year total to more than $15 million to support HIV/AIDS prevention and awareness programs. On the court, Team Elton got the best of Team Billie Jean with a 19-14 victory in the four-set showdown.

A capacity crowd watched Maria Sharapova‘s highly-anticipated appearance as she opened the night pairing up with Andy Roddick for a set of celebrity doubles against Elton John and Martina Navratilova. Sharapova and Roddick got the best of John and Navratilova 3-1 in an entertaining quick set that preceded the World TeamTennis match.

Team Elton took the lead in the first set of the night and never looked back en route to their second consecutive victory and an overall 13-11 series lead. Sharapova and 16-year-old junior Taylor Johnson teamed up in Sharapova‘s return to the court but it was the veteran doubles experience of Martina Navratilova and Liezel Huber that took the first set for Team Elton, 5-2.

Roddick and Philippoussis faced off in a battle of big serves in men‘s singles. Roddick held off Philippoussis 5-3 to build Team Elton‘s lead to 15-8 after three sets.

The evening started with all the players participating in a live auction that raised more than $150,000 of the evening‘s totals. The players were active bidders in the auction, with Sharapova winning a ticket package for the Broadway hit “Hamilton“ and John McEnroe buying an autographed Elton John piano bench.

The stars were out in Las Vegas on Monday night to support WTT Smash Hits as avid tennis fans and Las Vegas residents Gladys Knight and Mike Tyson took in the action on the multi-colored tennis court just steps away from where Elton John plays his hit show, “The Million Dollar Piano“ at Caesars Palace. International recording artists The Tenors opened the night by performing the national anthem.

About Elton John AIDS Foundation (EJAF)
At the Elton John AIDS Foundation (EJAF), we believe AIDS can be beaten. We act on that belief by raising funds for evidence-based programs and policies and also by speaking out with honesty and compassion about the realities of people‘s lives. Sir Elton John created EJAF almost 25 years ago, first in the United States in 1992 and then in the United Kingdom in 1993. Through hard work and with the help of our generous friends and supporters, the two foundations together have raised more than $350 million over the past quarter century to combat stigma, prevent infections, provide treatment and services, and motivate governments to end AIDS. The U.S. foundation focuses its efforts on programs in the United States, the Americas, and the Caribbean, while the U.K. foundation funds HIV-related work in Europe, Asia, and Africa. Join us in speaking out, taking action, and contributing to our efforts to achieve a world without AIDS. For more information, please visit .