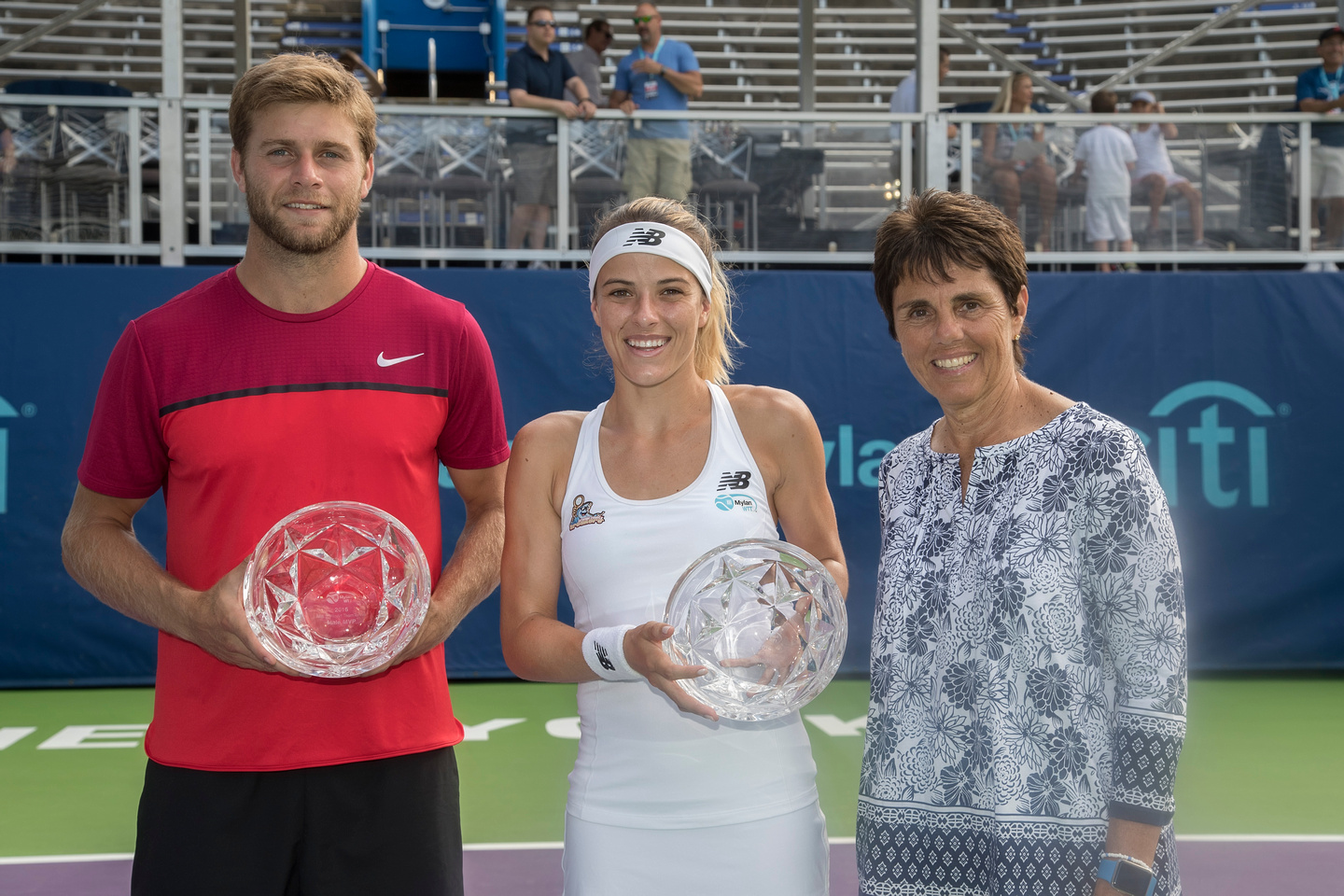 Americans Ryan Harrison of the San Diego Aviators and Nicole Gibbs of the Orange County Breakers were named recipients of the Mylan World TeamTennis MVP awards presented by Forevermark, based on their performance during the 2016 regular season. Harrison and Gibbs will each receive a $7,500 bonus and a diamond from Forevermark, a diamond brand from The De Beers Group of Companies.

Harrison and Gibbs both led their respective teams to the Mylan World TeamTennis Finals presented by Citi on Friday, August 26, in Forest Hills, N.Y. The duo will receive their awards during a presentation at the Finals.

Earning Mylan WTT Rookie of the Year honors are Fabrice Martin of the Philadelphia Freedoms and Michaella Krajicek of the Springfield Lasers who will each receive a $2,500 bonus.

John Lloyd, who led the San Diego Aviators to an 8-4 regular season record, was named Mylan WTT Coach of the Year.

San Diego and Orange County will battle for the King Trophy next Friday afternoon as the West Coast rivals face off for the fifth time this season. The teams split their regular season rivalry at two matches apiece but the Aviators will be the home team in the Finals based on most games won in the head-to-head matches. The Mylan WTT Finals presented by Citi kicks off at 3:45 p.m. ET at Forest Hills Stadium at The West Side Tennis Club in Forest Hills, N.Y.

Mylan WTT Female MVP presented by Forevermark:  Nicole Gibbs, Orange County Breakers
Nicole Gibbs led her team to the Finals for the second consecutive year with notable performances in both singles and doubles. Gibbs finished second in women‘s singles with a .602 winning percentage. She teamed with Breakers‘ partner Alla Kudryavtseva to finish the regular season as the top-ranked women‘s doubles team. Gibbs and Kudryavtseva won 52 of 91 games for a .571 winning percentage.

“Being a part of Mylan WTT itself has been such a blessing for me, so to be female league MVP this season is an incredible honor,“ said Gibbs. “I couldn’t have come close to this accomplishment without Alla Kudryavtseva’s high level of play on the doubles court, coach Rick Leach’s guidance and advice, and teammates Scott Lipsky and Dennis Novikov’s support. I am looking forward to competing for the King Trophy on the 26th and will do everything possible to help the Orange County Breakers take the title.“

Mylan WTT Male MVP presented by Forevermark:  Ryan Harrison, San Diego Aviators
Harrison was a late addition to the Aviators lineup, joining the team shortly before the season. It didn‘t take much time for the American to thrive in his first season of the fast-paced format as he finished the season atop both men‘s singles and men‘s doubles. Harrison‘s play was one of the major factors in the Aviators‘ run to their first Finals appearance. Harrison asserted himself as the top singles player throughout the season with a .608 winning percentage in singles, winning 45 of 74 games. In doubles, he teamed with world No. 10 Raven Klaasen to form the league‘s top doubles team with a .587 winning percentage.

“I’m extremely honored to have been awarded the Male MVP of Mylan WTT this year,“ said Harrison. “I’d like to thank my teammates and coach John Lloyd for all of their support this season. Without them, this wouldn’t have been obtainable. The Aviators staff and ownership is the very best so we are proud to represent them all in the Finals this year.“

Mylan WTT Male Rookie of the Year:  Fabrice Martin, Philadelphia Freedoms
Philadelphia was only one match out of the post-season action but it was still a memorable season for their rookie Frenchman Fabrice Martin. The doubles standout teamed with Naomi Broady as the top-ranked mixed doubles team, and partnered with Lucas Lacko and Donald Young to finish as the second-ranked men‘s doubles squad.

“I’m very proud and excited to receive this award,“ said Martin. “I really enjoyed every moment of those two weeks. My teammates and the staff of the Philadelphia Freedoms were the best! I made new friends, met plenty of interesting people and learned a lot from legends like Billie Jean. Even though I wish we made it to the Finals, I had an awesome time with my team on and off the court.“

Mylan WTT Female Rookie of the Year:  Michaella Krajicek, Springfield Lasers
The Springfield Lasers got off to a rocky start in 2016, dropping their first four matches of the season. But with the play of Michaella Krajicek, the Lasers rallied back to post four wins and play spoiler in the race for the post-season. Krajicek jumped into singles mid-season and finished her rookie campaign ranked fourth in the league with a .462 winning percentage. She teamed with Pauline Parmentier to become the third-ranked team in women‘s doubles at .505 and was also part of the third-ranked mixed doubles lineup at .521.

“I am very honored to be receiving the Rookie of the Year award,“ said Krajicek. “Besides having a lot of fun during the WTT season, I felt like I really fought hard every match to get the ÔÇÿW‘ for my team. So this is a nice reward for me.“

Mylan WTT Coach of the Year:  John Lloyd, San Diego Aviators
San Diego Aviators coach John Lloyd knows his way around a Mylan WTT court, having previously earned Coach of the Year award in 1990 as a player/coach for the Los Angeles Strings. That season, Lloyd led the Strings to the WTT title, a feat he hopes to repeat more than two decades later with the Aviators. Lloyd‘s squad finished 8-4 and ended the regular season first in men‘s singles and men‘s doubles, third in women‘s singles, fourth in women‘s doubles and fifth in mixed doubles. “I am so proud to be the coach of such a fabulous group of players,“ said Lloyd.

NOTE:  To be considered for regular season awards, a player must compete in 75% of their team matches.

ABOUT FOREVERMARK
Every FOREVERMARK diamond undergoes a journey of rigorous selection. Less than one percent of the world‘s diamonds are worthy of the Forevermark inscription. The unique inscription is an assurance that every Forevermark diamond meets exceptional standards of beauty, rarity and is responsibly sourced.

ABOUT MYLAN WORLD TEAMTENNIS
Mylan World TeamTennis is the innovative leader in professional team tennis competition and features many of the world‘s best players competing annually for the King Trophy, the league‘s championship trophy named after co-founder Billie Jean King. In 2015, Mylan WTT became only the fifth major professional team sports league in the United States to reach the 40th season mark, joining an elite list that includes the NFL, NBA, MLB and NHL.