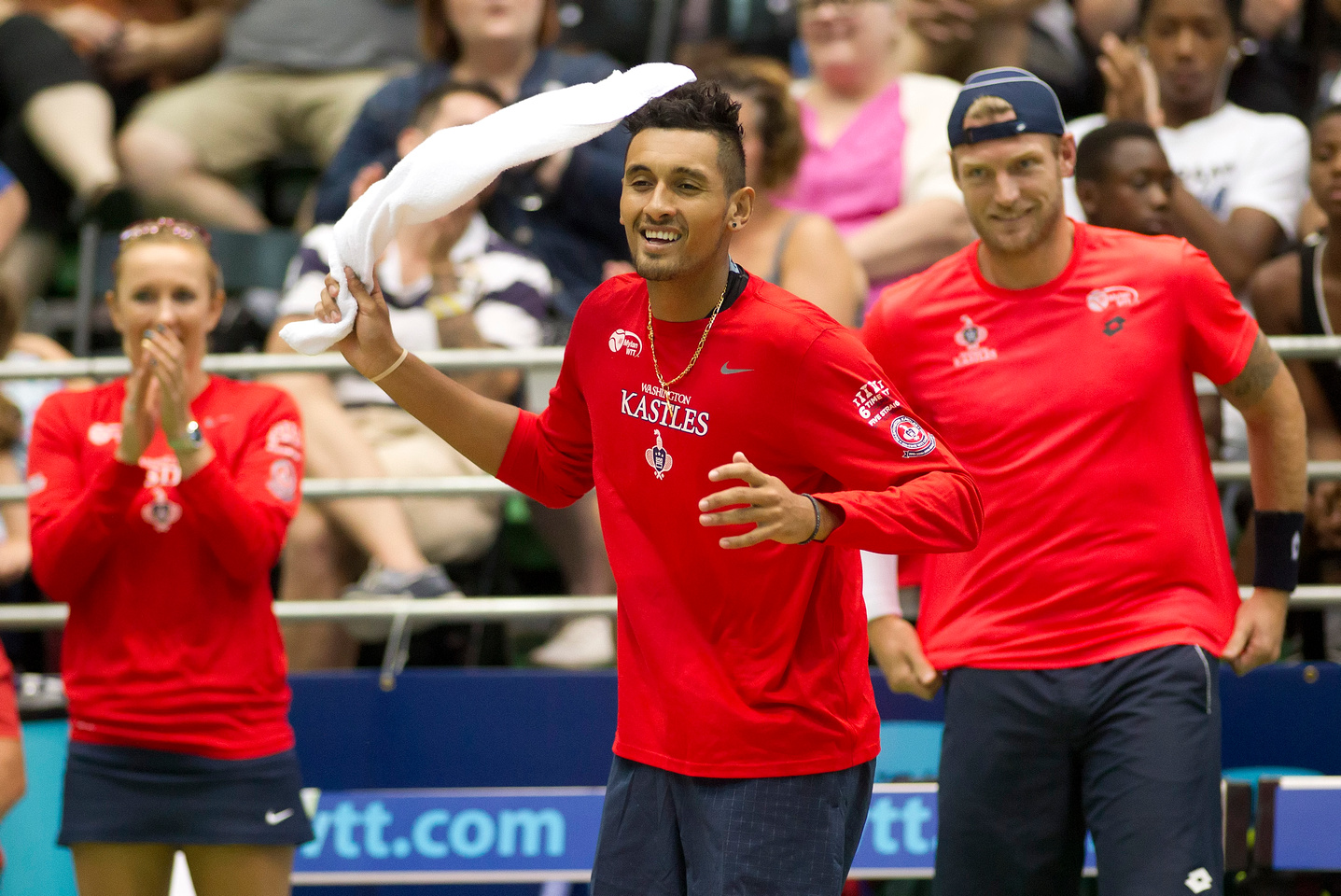 While their streak of five consecutive King Trophies came to an end this season, the Washington Kastles still went out on a winning note, defeating the Orange County Breakers 25-19 at the Smith Center at George Washington University.

Nick Kyrgios was an immediate factor for the home team, making his Mylan WTT debut. To open the night in mixed doubles, Kyrgios and Andreja Klepac took on Scott Lipsky and Alla Kudryavtseva. The Australian World No. 16 made his presence felt for the Kastles on serve, striking four aces in the set and not dropping a point to help the Kastles keep pace with one of the league‘s best mixed doubles teams. With the Kastles leading 4-3 in the set, Kyrigos got the Kastles off to a fine start on the Kudryavtseva serve, poaching a forehand volley winner and hitting a backhand return winner to create an opportunity at 0-2. Threatening for the love break, Kyrgios coaxed a double fault from the Russian to give the first set to the Kastles, 5-3.

Madison Brengle and Nicole Gibbs hit the court next in women‘s singles in a match of the league‘s top two players in the event. Although the first meeting of the Mylan WTT season went to Gibbs, as the two baseliners went head-to-head on Saturday, it was Brengle who came out on top — as she has in three of the pair‘s four professional tour meetings — as she did not allow Gibbs a break point opportunity and served at 71%. That dominance proved key for Brengle, as she secured the break behind four straight points from 2-0 down in the opening game when Gibbs buried a forehand in the net and never looked back from there to give the Kastles another 5-3 set.

Kyrgios was back on court for the men‘s doubles, as he teamed with big-serving compatriot Sam Groth against Scott Lipsky and Dennis Novikov. In a surprise to no one, the two Aussies combined to fire down a total of five aces, but the Breakers‘ team did enough to keep pace, winning 79% of points behind their first serve and saving a pair of break points, including defending a set point behind a big first serve from Lipsky at 3-4, to force a nine-point tiebreak. Big serving from Groth secured the Kastles the first two points, as Kyrgios helped him out with a forehand volley winner on the first second ball, before a big backhand return from Groth proved too hot for Novikov to handle for the 3-0 lead. The one point lost on serve loomed large for the Breakers, as the Kastles closed out the set behind another big backhand return from Groth.

With Brengle and Klepac already posting set wins for the Kastles on the night, their confidence proved key in women‘s doubles, as five of the eight games played resulted in service breaks. Washington sprinted out to a 3-0 lead, as Klepac fired a forehand return that Gibbs couldn‘t handle at the net for the insurance break, but the Breakers team wouldn‘t go down quietly. In response, Gibbs blasted a backhand return at Brengle at the net for a break of the Klepac serve, as the Breakers got on the board at the changeover, but another break for the Kastles saw the home side serving for the match at 4-1. It was then that the comeback began in earnest, as a big return from Gibbs set Kudryavtseva for the smash at the net for a break of the Brengle serve, before a big serve from Kudryavtseva handcuffed Brengle on the 3-2 point to close the set to within 4-3. Nonetheless, the mountain proved too big to climb, and behind the Klepac serve at 3-1, Brengle put the final smash away at the net for the 5-3 set.

Kyrgios arrived on court for the men‘s singles looking to sweep his three events on the night, but Novikov proved to be a worthy competitor on the singles court. The American withstood seven aces off the Kyrgios racket, while defending a total of four break points on his own serve to bring about the match‘s second nine-point tiebreak. With Kyrgios leading 2-0, Novikov streaked to three straight points by dominating with his forehand. Another ace knotted the breaker at 3-3, but Novikov had a chance to serve the set away — and he did, setting up set point with another big forehand before converting with a big serve to send the match into Extended Play. While Novikov‘s momentum continued into the first game of Extended Play to pull the breakers within 24-19, two more aces powered Kyrgios to a love hold and the Kastles to a win.

Philadelphia Freedoms def. San Diego Aviators, 25-9
Dominance was the name of the game for the Freedoms in their final match of the regular season, as they coasted over the Aviators in the final regular season match. The Freedoms swept the three doubles events in the match‘s first half, with the closest set going the way of Donald Young and Fabrice Martin in men‘s doubles, 5-3. In the pair of singles set in the match‘s second half, the Freedoms dropped a total of three games behind CoCo Vandeweghe and Young to end their season with a win.

Springfield Lasers def. New York Empire, 22-19
The New York Empire saw their first season as a franchise come to an end with a close defeat to the Springfield Lasers, who opened up a 15-8 lead at halftime en route to hanging on in the second half. Christina McHale ended her season with a 5-2 singles win, while Marcus Willis edged Benjamin Becker in a tiebreak and won the first game of Extended Play to keep the Empire in the hunt, but Becker won the final game on a deciding point to put an end to the Mylan WTT regular season.