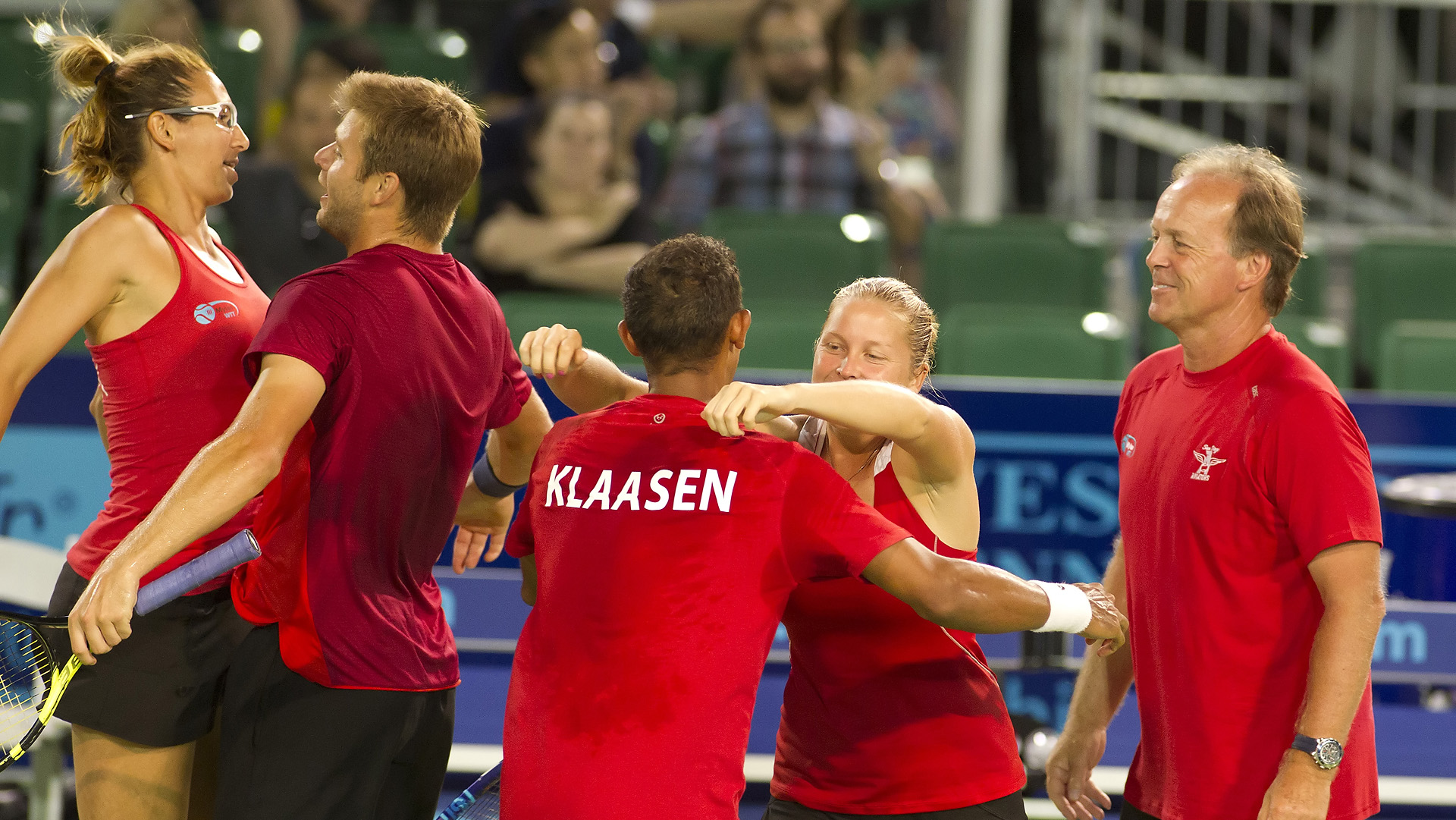 They play an hour apart on the West Coast, but the Orange County Breakers and San Diego Aviators will play for the King Trophy just a stone‘s throw from the US Open. On the very court at the West Side Tennis Club where the Mylan WTT Finals presented by Citi will be held in two weeks‘ time, the San Diego Aviators clinched their spot opposite the Breakers, who clinched their spot earlier in the week, with a 24-16 win over the host New York Empire.

The night started off right for San Diego, as Mylan WTT rookie Ryan Harrison defeated Marcus Willis 5-3 in the men‘s singles. Harrison, who showed off some big-serving last night in the Aviators‘ loss to Springfield, kept that momentum rolling in Forest Hills, as he struck three aces and never allowed Willis a look at a break point. After a brief weather delay, the two players returned to the court, and it was Harrison who broke through for the only break of the set; with Willis leading 3-0 on serve, four errors off the racket of Willis gave Harrison the 4-3 lead en route to the win.

However, the Empire hit back in the second event, as Christina McHale took on Shelby Rogers in the women‘s singles. After the first eight games went by without a winner being decided, a heavy forehand from McHale forced an error and gave her a 3-2 lead in the tiebreak, and after Rogers went long with a backhand at the end of an extended rally, McHale had three set points. Rogers saved the first with a big serve, but on the ensuing point, the Empire pulled to within one game when Rogers buried a backhand into the net to give McHale the set, and a 9-8 score.

The Aviators built an advantage in the third event of mixed doubles early, breaking the Maria Irigoyen serve in the fourth game; while Neal Skupski read the play from Raven Klaasen at the net, he couldn‘t handle the volley and the Aviators won the game to lead 2-1. The Darija Jurak serve quickly came under fire in the next game, as a passing shot winner and a forced error put the Aviators down 2-0 on her serve. After winning the next two points to draw even, a dominant Klaasen at the net intercepted a pair of volleys to give San Diego the game and pull their lead to 3-1 at the change of ends. She stepped to the line again to end the third set, and held once again with the help of an active Klaasen at the net to give the Aviators the third event, 5-3 and a 14-11 lead overall.

The Aviators jumped out to an early lead in women‘s doubles, as a perfectly measured backhand volley winner from Jurak gave them the first game of the set, but they were forced to fight back after the next two games went to the Empire for a break lead. The turning point in the match came on the Irigoyen serve in the fourth game; after the Empire built a 3-1 advantage looking to hold, three straight points went San Diego‘s way and the Aviator team earned the break back when Jurak put away a smash winner. That was the first of four games to go the visitors‘ way, and they sealed the set at 5-2 on a big serve from Jurak.

The first six games went with serve in the final event of men‘s doubles, despite the Aviators holding several chances to break, but the visiting side finally broke through on the Skupski serve in the seventh game; Harrison stroked a backhand return that Willis was unable to handle at the net to set up two break points, and a big return from Klaasen down the middle of the court secured the break for 4-3. The Aviators‘ side easily held serve to secure their spot in the finals for the first time as presently constituted.

Philadelphia Freedoms def. Orange County Breakers, 21-18
Needing a win and an Aviators‘ loss to keep themselves in playoff contention, the Philadelphia Freedoms did their part first, knocking off the No. 1 team in Mylan WTT. A 5-2 win in men‘s doubles for Donald Young and Fabrice Martin started the night off right for the Freedoms, but three events later and partially thanks to a 5-3 win for Nicole Gibbs over the debuting CoCo Vandeweghe, the two teams were tied at 16-16. That set the stage for Young to play hero, as he saved all seven break points he faced against Dennis Novikov to win the set 5-2 and secure the match.

Washington Kastles def. Springfield Lasers, 21-20
In a match that came down to the wire, the Kastles rebounded after dropping the first two events to see off Springfield on the road. Men‘s singles and women‘s doubles each went to the home team 5-3, but Sam Groth and Treat Huey responded with a 5-3 win for the Kastles to close the gap ahead of halftime. An identical win for Madison Brengle pulled Washington even heading into the final event, which was dramatically sealed in a full team effort — the tiebreak set was won by Huey and Andreja Klepac, with the former subbing in for Groth at 3-3.

New York Empire @ SPRINGFIELD LASERS, 7:00 PM CDT
Having closed out a home slate at the West Side Tennis Club, the Empire finishes out its first season as a Mylan WTT franchise with a visit to Springfield.

San Diego Aviators @ PHILADELPHIA FREEDOMS, 7:00 PM EDT
The Aviators, who could‘ve also clinched a spot in the Mylan WTT Finals with a win at Philadelphia had they not done so on Friday, end their regular season with a visit to the Pavilion at Villanova.