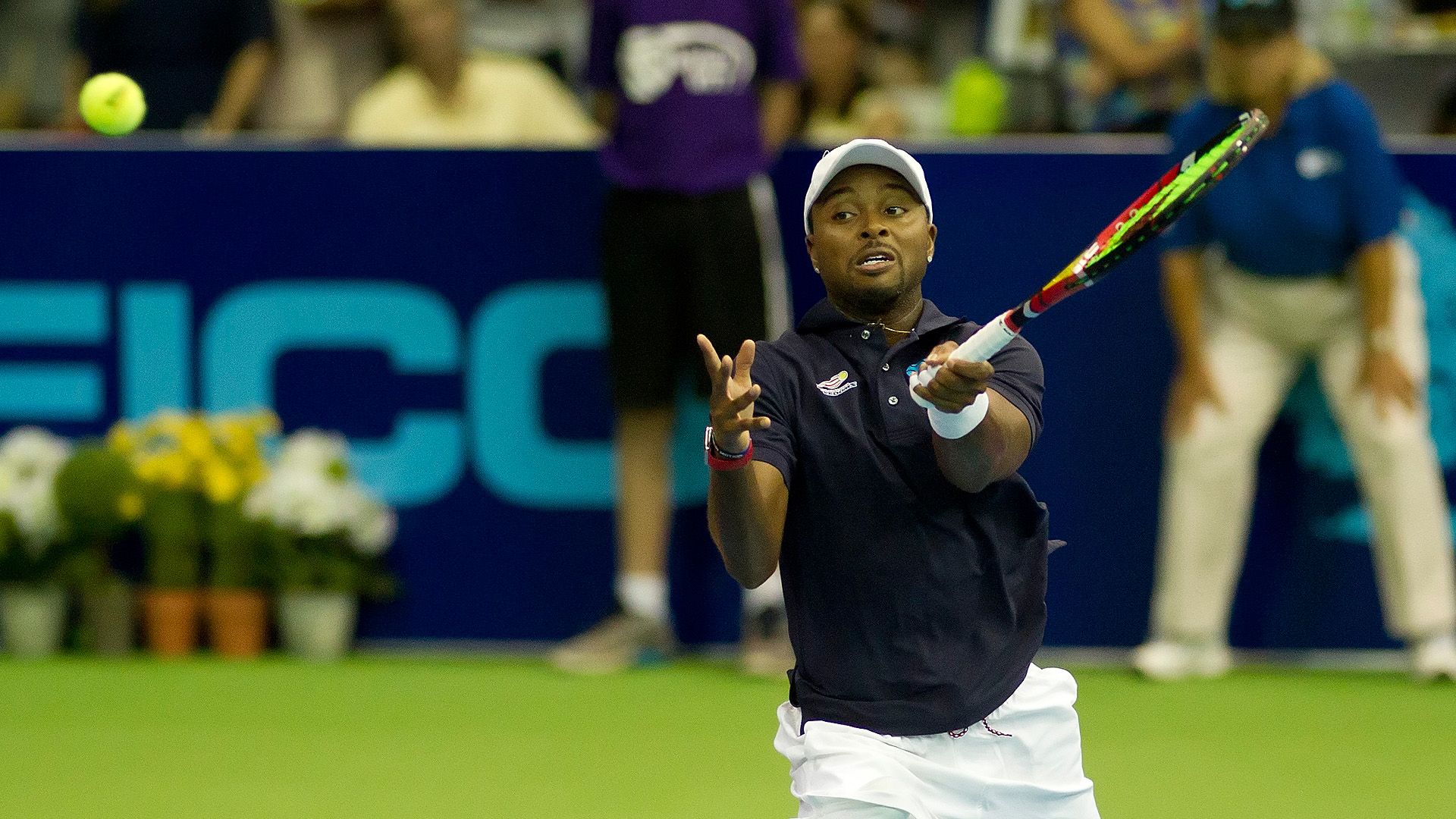 In a wild match that featured a pair — and nearly a trio — of bagel sets, Andy Roddick‘s last stand in Mylan World TeamTennis for the 2016 season wasn‘t enough to get the New York Empire a victory against the Philadelphia Freedoms on Wednesday night, as Donald Young edged the 2003 US Open champion in the season‘s first Supertiebreaker to finally snap the Freedoms‘ four match skid, 17-16(3).

Beginning in men‘s doubles, Roddick showed off some of the serving that cemented him at the top of the ATP World Tour for nearly a decade, capping the opening game of the match with a Mylan Ace, but a double fault from his partner Neal Skupski on break point put the team down 3-1 head to the change of ends. After holding his opening service game at love, 6‘6“ Frenchman Fabrice Martin hammered home a big smash and an even bigger serve to stretch the Freedoms‘ lead to 4-2.

Roddick matched Martin with a second hold of his own, capping the game with another Mylan Ace out wide past Young, putting the southpaw at the line to serve out the set for the Freedoms. He couldn‘t convert on the opportunity, double faulting twice in the game to drop serve, as Marcus Willis subbed in for Skupski to try and get the Empire into a tiebreak. That he did — but not without some drama — as he fired a Mylan Ace to save set point before Roddick smashed home the final point of the game to take it into the nine-point decider. The momentum left the Empire though, and some shot-making from Young secured the Freedoms a tie-bagel and the opening set — with Young converted match point on a feathery drop shot.

Two double faults from Naomi Broady in her first service game handed Christina McHale the early break in the women‘s singles, continuing the early theme of Freedoms struggling on serve. McHale‘s all-court game proved too strong for Broady in the opening three games, as she displayed the kind of form that took her to both wins in the pair‘s head-to-head on the WTA Tour, and Samantha Crawford subbed in for the Freedoms when trailing 3-0. She too had few answers against McHale‘s combination of offense and defense, as her footwork and forehand secured her another break of serve. After having lost seven of her first eight sets of the season, including four by 5-0 scores, McHale rebounded with a bagel set of her own that saw the Empire lead 9-5.

Momentum wasn‘t with the Empire though, n the deciding point, Martin fired a big return right at the body of Maria Irigoyen, who couldn‘t handle the pace and sent a volley long for a 2-0 Freedoms lead. The booming tennis continued from the Freedoms‘ side over the course of the set, as they returned the bagel to the Empire, who subbed McHale in for the final game to no avail, to take a 10-9 lead at halftime.

With neither team able to grab much momentum over the course of the night, a forcing volley from Irigoyen that Broady couldn‘t handle saw New York take the break lead to begin women‘s doubles, and as Irigoyen built a 2-0 lead behind her swinging, lefty serve, Freedoms‘ coach Josh Cohen called a brief GEICO Timeout to talk it over with his team. However, that did little to stymie the momentum for the Empire, who built a 4-0 lead at the change of ends. With McHale serving for the bagel set, and to go 10-11 in games won on the night, the Freedoms got on the board thanks to some big returning from Broady in particular, but the Empire broke again right away to secure the breadstick set and lead 14-11 headed to the final event.

In a match that was largely dominated by Young from the back of the court, the younger American won four of the first five games as the Freedoms hand their backs against the wall. While Roddick fired another ace down the tee — one of a total of seven that the Empire hit across the five sets — to hold for 2-4, Young was largely untroubled in the final game as Roddick looked to conserve his energy for a final push in the Supertiebreaker.

Young held his first two contentious line call that went against the Empire put Yong up 2-0, before another Mylan Ace off Roddick‘s racket got him on the board. On the ensuing point, the Empire disagreed as another Roddick forehand was called out, and a one-two combo of a big serve and forehand down the line winner from Young put the Freedoms up 5-1 at the change of ends. Roddick continued to serve big, as he grew more fired up as the Supertiebreaker went on, but Young set up quadruple match point as he rifled a pass past a charging Roddick at the net for a 6-2 lead. While the American legend managed to save the first set point by running Young ragged around the court, a final, hooking forehand from the southpaw secured the tiebreak for the Freedoms and capped off the thrilling win.

The streaking San Diego Aviators ran their winning streak to five straight matches on Wednesday night, taking three of the five events against the Washington Kastles on the road. In a match where the margins couldn‘t have been tighter, three of the five events went to tiebreaks, while the other two were determined by just one break of serve. Two of the three breakers went the way of the Kastles in the first half of the match as they claimed men‘s and mixed doubles, in between a 5-3 women‘s singles win for the Aviators‘ Shelby Rogers. With the two teams even at 13-13 headed to the fourth event, Rogers and Darija Jurak edged the third tiebreak set of the match before Ryan Harrison closed the match with a 5-3 win over Stephane Robert.

A 5-1 win for Alla Kudryavtseva and Nicole Gibbs in women‘s doubles proved to be the difference-maker for the Orange County Breakers as they edged the Springfield Lasers for their sixth straight victory. The win for Gibbs and Kudryavtseva helped Orange County hold a slim 12-11 lead at halftime, which grew to 17-14 thanks to Gibbs‘ win over Michaella Krajicek in singles. While Benjamin Becker won the final event of the night over Dennis Novikov in a tiebreak, two aces earned Novikov the love hold in the first and final game of Extended Play.

Orange County Breakers @ NEW YORK EMPIRE, 7:00 PM EDT
With opposite records in the 2016 season, the Breakers travel to the West Side Tennis Club at Forest Hills looking to run their season-high winning streak to seven matches and keep pace with their California counterparts atop the standings.

Washington Kastles @ PHILADELPHIA FREEDOMS, 7:00 PM EDT
With one match separating the Kastles and Freedoms in the standings, the two teams meet at the Pavilion in an effort to keep their playoff hopes alive.

San Diego Aviators @ SPRINGFIELD LASERS, 7:00 PM CDT
Marquee player John Isner makes his first appearance of the 2016 Mylan WTT season for the Lasers on Thursday night, as they look to cool off the red-hot Aviators who travel the Springfield.