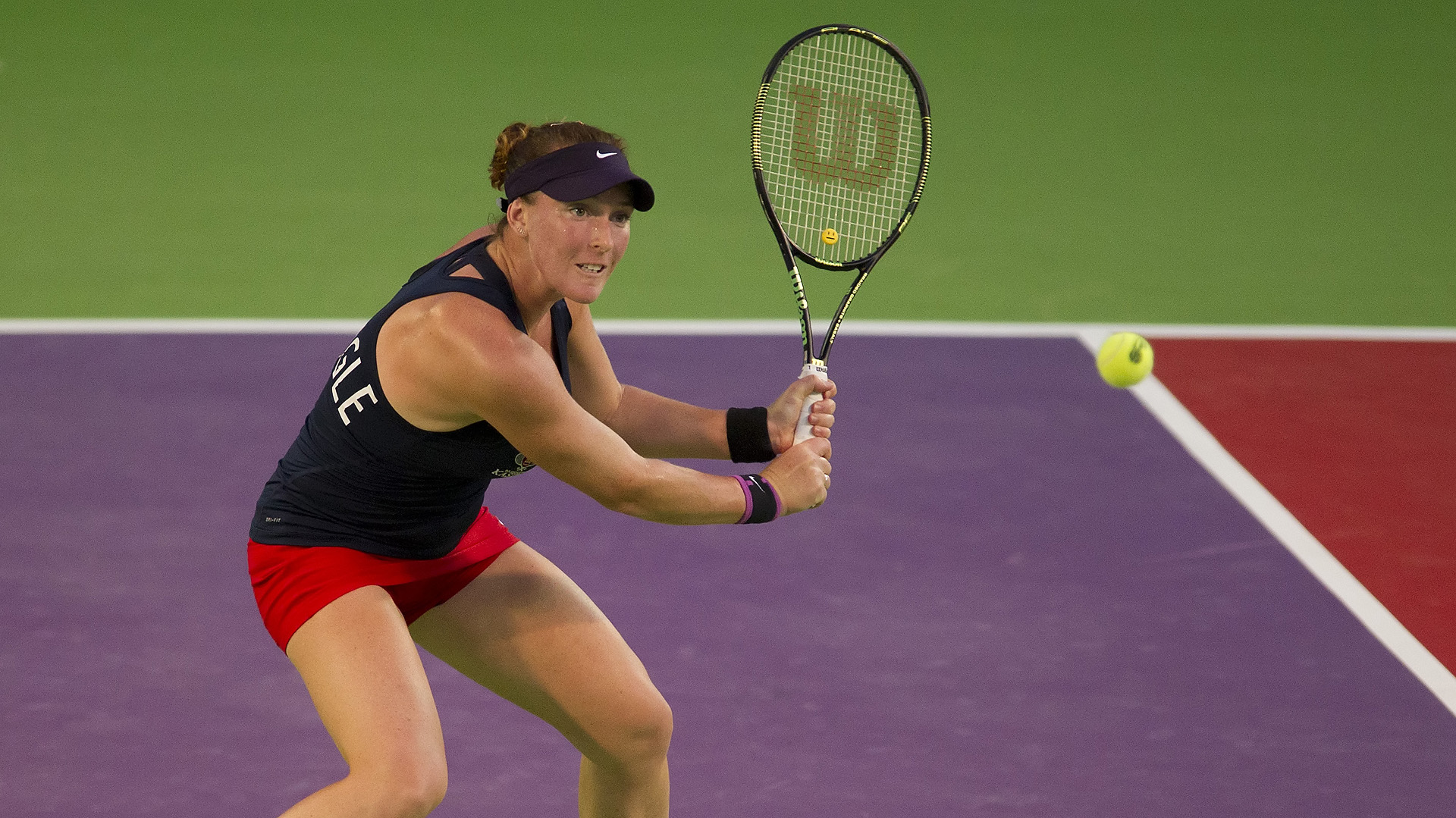 Monday night‘s match against the New York Empire ended in dramatic disappointment for the Washington Kastles, but Madison Brengle ensured they‘d feel none of that on Tuesday night.

Brengle claimed all 10 games she played in women‘s singles and with Andreja Klepac in women‘s doubles to lead the Kastles to a critical victory over the Andy Roddick-led Empire, 22-13 at Forest Hill Stadium at The West Side Tennis Club.

Roddick, appearing in his ninth season of Mylan World TeamTennis as a marquee player, began the night in men‘s doubles alongside Neal Skupski against Treat Huey and St├®phane Robert. From 0-2 down in the opening game, it was vintage Roddick on serve, as the 2003 US Open champion hit a pair of service winners and two Mylan Aces — with one coming on the 3-3 deciding point — to save a pair of break points and get the Empire on the board. From that point, neither side managed to carve out a break opportunity on serve, with the Mylan Aces raining down; Huey fired one past Roddick to hold serve for 1-1, while both teams won over 80% of the points on their first serves in the set. After eight holds of serve, the duos found themselves in a nine-point tiebreaker, and a pair of hot shots secured the set for the Empire. Returning at 2-1, Skupski closed out the point of the night with a reflex, behind-the-back volley winner, before Roddick fired a forehand return winner off the Robert serve to secure the opener for New York.

In Monday night‘s win for New York, Christina McHale dominated Brengle to the tune of a 5-1 set, as she won all three of the deciding 3-3 points played — but the story couldn‘t have been more different on Tuesday night in the second event of women‘s singles. Three of the first four games went to deciding points, and by using heavy, deep balls to rush McHale into errors off the forehand side, Brengle claimed all three to quiet the New York crowd and lead 4-0 at the change of ends. In the final game, Brengle sprinted out to a 3-1 lead by forcing errors off the return, and although McHale saved one set point with a forehand winner, she was unable to hold off Brengle for much longer and surrendered the 5-0 set.

In the shadow of the location of their only ATP World Tour meeting — a victory for Roddick in the first round of the 2010 US Open, Roddick and Robert returned to the court for men‘s singles in the night‘s third event. Robert struck first in the opening game, as he struck a deep return off his lefty two-handed backhand to force a Roddick miscue and earn the first break. That proved to be more than enough for the Frenchman — who, despite serving at 50% in the match, struck a total of five Mylan Aces — never surrendered the advantage. From 2-2 on serve, Robert‘s final ace and a big backhand down the line secured the final game for a 5-3 victory and put the Kastles up, 14-8 at halftime.

Brengle continued her hot streak on the night in the women‘s doubles, as she held at love to begin the fourth event. A break of serve came quickly too, as a big return from her racket drew a backhand error from McHale to make the score 2-0. Three more games went the Kastles way too, as they allowed the Empire team of McHale and Maria Irigoyen just nine total points in the set to run away with the second bagel of the night and a 19-8 lead. While Irigoyen and Skupski got the Empire on the board in terms of sets with a 5-2 win in mixed doubles over Klepac and Huey, the deficit proved too large to overcome in Extended Play. With the Slovenian serving in the first game, she traded big groundstrokes with Skupski and forced the Brit into an error to bring up three match points for the Kastles; although the Empire pair saved two, a punch on the serve from Klepac set up Huey to knock off a backhand volley for the win.

Orange County Breakers def. Springfield Lasers, 24-17
The Orange County Breakers ran their winning streak to a season-high five, defeating the Springfield Lasers at home on Tuesday night. A pair of 5-2 sets, for Dennis Novikov and Scott Lipsky in men‘s doubles and Nicole Gibbs in women‘s singles, put the Breakers up 10-4 after two events, and largely gave them the cushion they needed to see out the win. The remaining three sets went to tiebreaks, and although Benjamin Becker took the men‘s singles for the Lasers, the Breakers took mixed and women‘s doubles in the second half of the match to roll to the victory, completed a 6-0 record at home.

New York Empire @ PHILADELPHIA FREEDOMS, 7:00 PM EDT
Roddick leads the Empire into the Pavilion at Villanova University on Wednesday night looking for a victory, while the Freedoms look to snap a skid of four straight defeats, dating back their win over the Kastles on August 2nd.

San Diego Aviators @ WASHINGTON KASTLES, 7:00 PM EDT
The league‘s joint first place team travels to the Smith Center in the nation‘s capital in a must-see encounter, as the Kastles are coming off one of their more dominant wins of the season.

Orange County Breakers @ SPRINGFIELD LASERS, 7:00 PM CDT
After picking up a victory against the Lasers at home on Tuesday night, the Breakers travel to Springfield for a rematch between the two squads less than 24 hours apart.