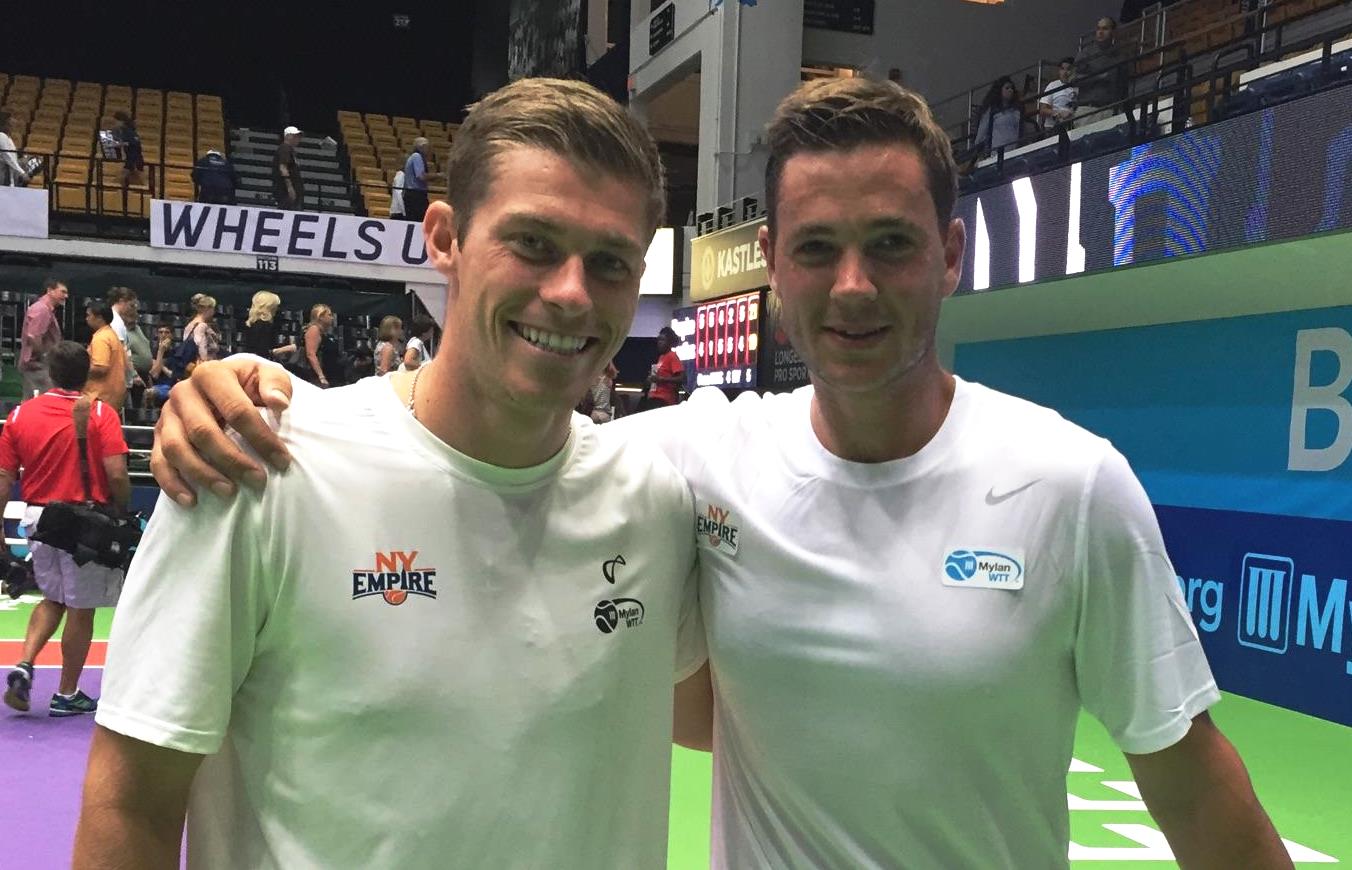 He electrified the All-England Club this summer, and Great Britain‘s Marcus Willis brought the same energy to the Washington Kastles‘ Smith Center in Washington, D.C. on Monday night, leading the New York Empire to its second win of the season in dramatic fashion, 21-19.

Willis, who now-famously won six matches in pre-qualifying and qualifying to reach the main draw at his home Grand Slam before winning his first round match and falling to Roger Federer on Centre Court, stepped into the closer‘s role on Monday night and duly defeated Stephane Robert in a winner-take-all tiebreak in his first-ever match in Mylan World TeamTennis.

Before the dramatic finish, though, the night kicked off with the mixed doubles — and it was the women of each respective pairing that stole the show. Andreja Klepac played a key role in the Kastles‘ first break of serve, connecting on a big return off the Neal Skupski serve to help set up break point and put Washington ahead, 3-1. However, Maria Irigoyen had other ideas, and some fine returning off of her lefty forehand helped the Empire get the break back. Klepac stymied the momentum for the Kastles in game seven, coming up with some big serves to help her side rally from 1-3 down, but the tiebreak was Irigoyen‘s time — using every angle of the court, and getting a netcord that fell in her favor for the mini-break, the Argentine led the Empire to the first set of the evening, and a slim 5-4 lead.

Up next, New York‘s Christina McHale flipped the script for the Empire, as she faced off against Madison Brengle. After falling behind 1-3 in her opening service game, McHale saved three break points with three straight winners — one on serve, one with a volley and winning the deciding point with a forehand — to take the first game of the set. With the match at 1-1, McHale broke through first, using her forehand to great effect in the point and finishing at the net to lead 3-1. She dominated the league‘s leader in women‘s singles from there, winning the set 5-1 to turn the match in the Empire‘s favor, 10-5.

Another tiebreak followed in men‘s doubles, as Willis and compatriot Skupski took on Kastles substitutes Treat Huey, ranked No. 19 on the ATP Tour in doubles, and Robert. The two teams had contrasting nights on serve, as the Empire landed 70% of first serves and hit five aces, while the Kastles struggled to the tune of 42% first serves with two double faults — but after eight games, and a break apiece, the two teams found themselves in a nine-point tiebreak. In the decider, Huey showed off the kind of tennis that‘s taken him to seven ATP crowns in doubles, carving out set point with a perfectly-executed backhand poach, before Willis missed the final return off the Robert serve to give the Kastles their first set of the night, 5-1 in the breaker.

In front of their home crowd, the Kastles‘ comeback began to gain strength out of halftime thanks to a strong performance by Brengle and Klepac. The duo faced off against McHale and Irigoyen, competing against their second team of Kastles‘ opponents this season after falling against Martina Hingis and Anastasia Rodionova in the first meeting between the two teams on Aug. 2.

The first test for the Empire came early, after the Kastles called a GEICO Timeout ahead of the deciding point on McHale‘s serve to open the match — and McHale was indeed iced, double-faulting to hand the early initiative to Washington. Although she and Irigoyen broke the Klepac serve back immediately, another deciding point went the way of Washington courtesy of a big return of the racket of the Slovenian, and a big serve from Brengle on the set‘s third and final deciding point gave the Kastles a 3-1 lead at the change of ends. That lead held up to the tune of a 5-2 decisive win for Washington, which saw the match poised at 16-15 in favor of New York headed to the final event.

Willis and Robert, both blessed with big serves and touch around the net, showed off all court tennis in the men‘s singles with little to separate them over the course of the set. The two worked all parts of the court over their encounter, wowing the crowd with combinations of dropshots, angles and serves — and fittingly, after eight games where neither had a look at a break point, the pair found themselves in the third nine-point tiebreaker of the night. The scenario was simple: a win for Willis would secure a win for the Empire, while a win for Robert would push the match into a Supertiebreaker — a first for Mylan WTT this season.

After the first six points between the two rookies in the tiebreak went with serve, Willis brought up match point as Robert netted a backhand — but the Frenchman had other ideas, forcing a final deciding point by handling several Willis slices with aplomb and finally forcing a Willis miss off of a fine cross-court forehand. With the match on the line in the final point, it was Willis who came out on top in a circus rally, sprinting to the net to track down a drop shot and then scooping up a volley from his shoes into the open court to close out on of the most thrilling matches of the 2016 Mylan WTT season thus far.

San Diego Aviators def. Philadelphia Freedoms, 23-15 (EP)
A dominant start for the San Diego Aviators gave them their fourth straight win of the season and sole possession of first place, thanks to Orange County having the night off. The first three sets went San Diego‘s way in convincing fashion, highlighted by a bagel set for Shelby Rogers as neither Samantha Crawford nor Naomi Broady found answers in the women‘s singles, and the Aviators led 15-5 at halftime. The Freedoms hit back in the second half, taking women‘s doubles in a tiebreak and mixed doubles 5-3, but the deficit proved too much to overcome as Darija Jurak and Raven Klaasen claimed the first game of Extended Play to hand Philadelphia its third loss in a row.

Washington Kastles @ NEW YORK EMPIRE, 7:00 PM EDT (LIVE ON ESPN3)
Following Monday‘s dramatic match at the Smith Center, the Kastles head to Forest Hills Stadium at the West Side Tennis Club looking to return the favor. Andy Roddick makes his 2016 debut for the Empire, as the 2003 US Open champion and former World No. 1 returns to play his ninth season of Mylan WTT.

Springfield Lasers @ ORANGE COUNTY BREAKERS, 7:00 PM PDT
After both teams got a chance to recharge on their night off, the Orange County and Springfield face off for the first time this season, as the host Breakers look to move into a tie with San Diego atop the standings.