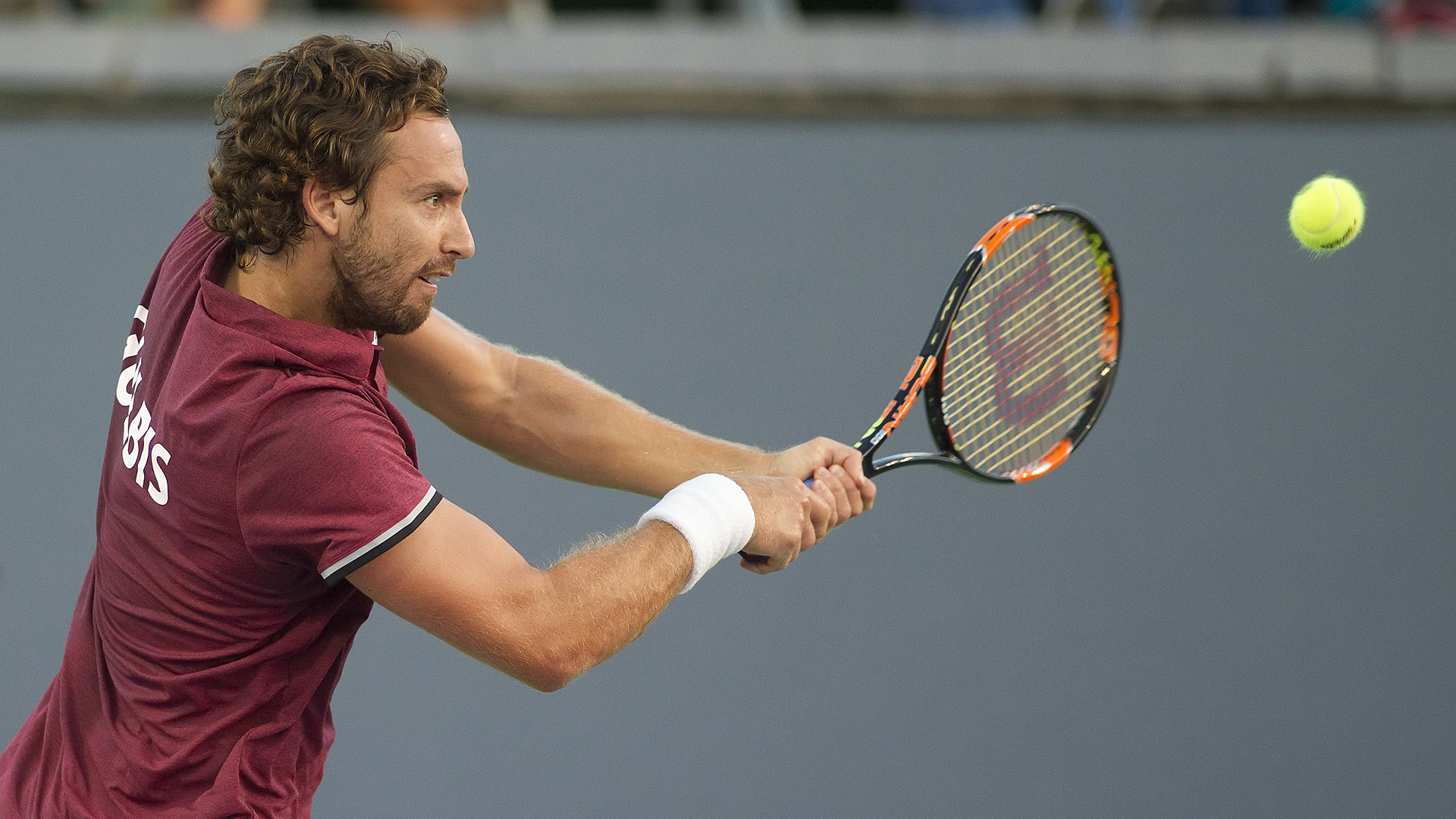 A new friend came to play for the San Diego Aviators on Saturday night, as former Top 10 player Ernests Gulbis stopped by to help the home team win its second straight match by defeating the visiting Washington Kastles, 21-15.

Gulbis, in the San Diego area working with famed coach Larry Stefanki, kicked off the night in men‘s singles, and showed off some of the tennis that got him into the world‘s Top 10 and to the semifinals at Roland Garros in 2014 — albeit with a retooled forehand swing. Although the unconventional technique that became his trademark is now but a memory, his explosive tennis certainly isn‘t; serving big and totaling four aces overall, the Latvian largely overwhelmed Bjorn Fratangelo to the tune of a 5-2 set to kick off the night for the home team.

However, the Kastles hit right back with a weapon of their own in Madison Brengle, who, despite leading the league in women‘s singles this season, was looking to snap a two-match losing streak in the event. Although Shelby Rogers served well for the Aviators — landing 86% of her deliveries — Brengle proved too tough and still managed to break a total of three times to roll to a 5-1 win and put the Kastles in the lead. Back came San Diego, though, as Gulbis and Raven Klaasen quickly looked as though they‘d been playing together for the entire season thus far. On the other side of the net, Ken Skupski struggled on serve for Washington, landing only 36% of his first serves. That combination proved to be enough for the hosts to squeak away with another win, as one break of the Skupski serve was enough for the Aviator side to close the set out 5-3 and give them an 11-9 lead at halftime.

Out of the break, a pair of 5-3 sets went the Aviators‘ way, as Rogers, Darija Jurak and Klaasen combined to see the home team over the finish line. Jurak and Rogers played the big points in impressive fashion, as they saved a pair of break points and won a pair of 3-3 games to claim a win over Brengle and Andrea Klepac — while Jurak and Klaasen used their return games to great effect in the final game to seal an identical set victory.

Springfield Lasers def. Philadelphia Freedoms, 23-18
After dropping the first two meetings against Philadelphia to begin the season, the Springfield Lasers have hit back in a big way, taking each of the next two meetings. In Saturday‘s affair, it was the Freedoms who got off to a stronger start, as Lukas Lacko and Fabrice Martin edged Benjamin Becker in a tiebreak to kick things off, but from there, the Lasers wrestled back control. The next three sets went the way of Springfield to put them in command, including a 5-2 win for Michaella Krajicek over Samantha Crawford in the first women‘s singles match of the year for both. While Lacko defeated Becker in the final set of men‘s singles to send the match to Extended Play, the deficit was too much to overcome and a 4-1 hold of serve for Becker quickly put another win on the board for Springfield.

Orange County Breakers def. New York Empire, 25-8
A dominant night for Orange County on home court saw them sweep all five sets against the New York Empire to win their third straight match, 25-9. Three of the five sets went 5-1 in favor of the Breakers, as Nicole Gibbs and Alla Kudryavtseva combined to win 15 of the 18 games that they played — as Kudryavtseva partnered Scott Lipsky in mixed in the penultimate set before the two women teamed up to cap the match in doubles. The men did the lifting in the opening half of the match, as Lipsky and Dennis Novikov got Orange County off on the right foot with a 5-3 win in men‘s doubles before Novikov followed up Gibbs‘ singles effort with a 5-2 win in men‘s singles.

Springfield Lasers @ SAN DIEGO AVIATORS, 7:00 PM PDT
Two streaking teams meet at Omni La Costa Resort and Spa, as both the Lasers and Aviators have won two consecutive matches. San Diego looks to continue its charge to the top of the league‘s leaderboard, as fellow 4-2 teams Philadelphia and Orange County will face off.

Philadelphia Freedoms @ ORANGE COUNTY BREAKERS, 7:00 PM PDT
The Freedoms and Breakers, while tied atop the league‘s standings with San Diego, meet on the West Coast at different points in their seasons, as the Freedoms look to snap a two-match losing streak while the Breakers look to run their string of consecutive wins to four.