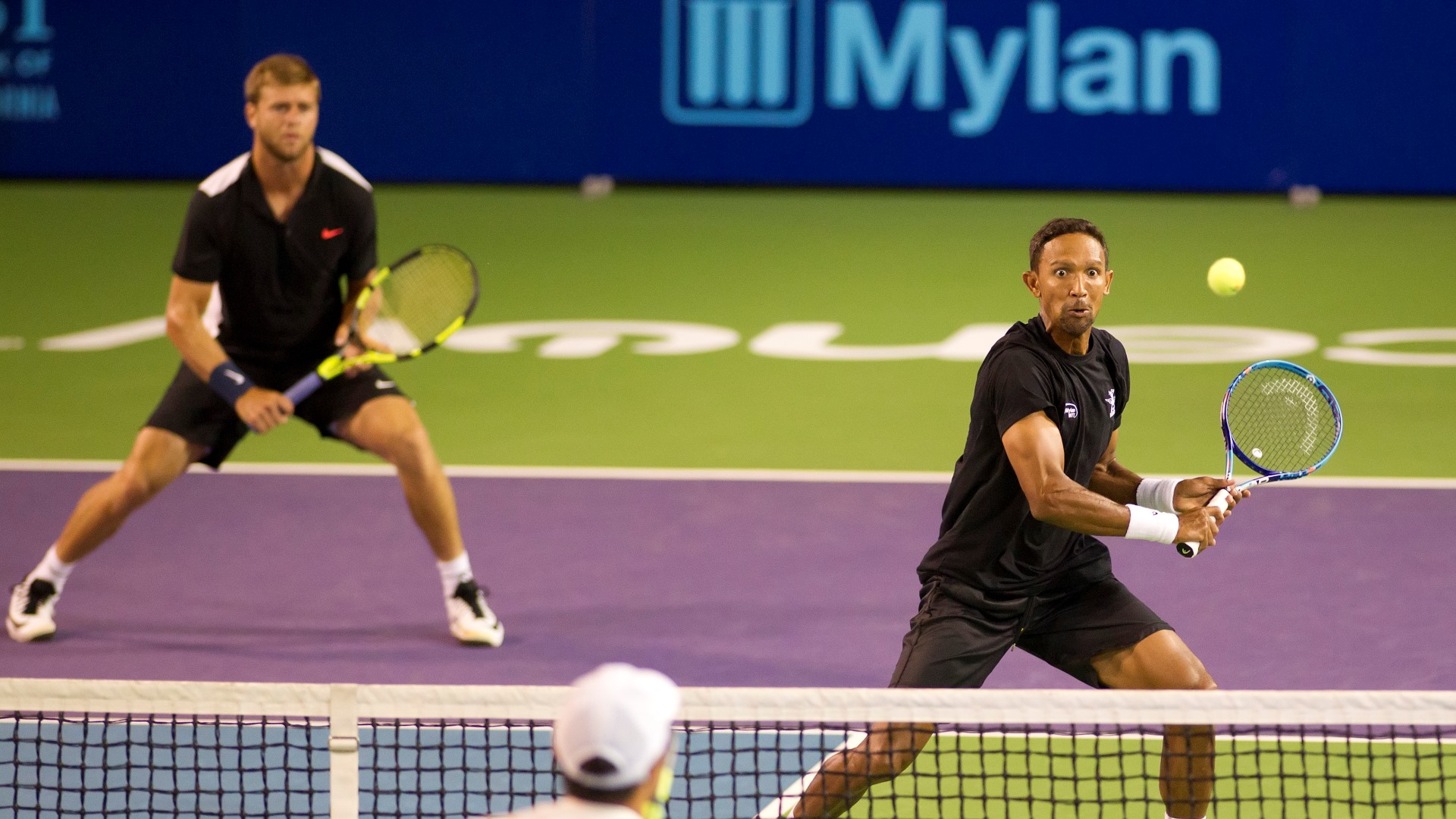 On a night where three sets went to tiebreaks, the San Diego Aviators saved some of their best tennis for the tense and tightest moments to defeat the New York Empire, 24-18 in front of the home crowd at the Omni La Costa Resort and Spa.

Daniel Nguyen, substituting in for Olympian Guido Pella for New York, began the night taking on San Diego‘s Ryan Harrison, looking to win his third straight men‘s singles set. After Patrick McEnroe called an early GEICO Timeout in the second game, where the Stanford grad gave advice to a USC Trojan, Nguyen found a winning strategy — one volley winner and another big serve closed out the game for 1-1. With that first game out of the way, Nguyen loosened up and began hitting with length and depth while dominating at the net, closing out the break of serve with a smash winner.

Nguyen showed some nerves as he looked to get himself in a winning position in his second ever Mylan WTT match (having ironically subbed last year for San Diego), and a double fault and a backhand return winner got Harrison back on serve. From there, Harrison started to show the kind of tennis that took him to a career-high ATP ranking of No. 43, as he hit an ace and stroked a big forehand to take his third straight game and lead 4-3. Although Nguyen stymied his momentum for a moment to take the set into a tiebreak, a sign of things to come, Harrison painted lines and blasted serves in the breaker to start things off right for San Diego.

Two double faults saw Christina McHale staring at an 0-3 deficit in the opening game of the women‘s singles, but four points in a row got her the hold against Shelby Rogers to begin the second event. The New Jersey native saved another two break points at 1-1, before breaking courtesy of a Rogers double fault for 3-1 at the change of ends. Undaunted, Rogers broke back at love to finally convert on a chance in the McHale service game, and a barrage of heavy forehands and serves gave her a hold for 3-3. McHale stopped the rut with another tough hold, only until Rogers matched her to take the set to another tiebreak. Like Harrison before her, Rogers too used a combination of heavy groundstrokes and aggressive tennis to secure the set in dominant fashion and make it 10-8 in favor of San Diego.

After five holds to begin men‘s doubles, it was Neal Skupski who blinked first and double faulted to surrender his serve to trail 4-2. With Raven Klaasen serving for the set, Harrison showed off his skills in the forecourt and dominated at the net — including winning a stunning rally on match point with a forehand putaway — to make it 15-10 for the home team at the break.

Looking to win New York‘s first set of the night, McHale and Maria Irigoyen built a 4-1 lead in women‘s doubles and had a pair of set points on the Argentine‘s serve at 4-2, but Rogers and Darija Jurak hit back to break and hold with the help of a raucous crowd to push into the match into its third tiebreak set. The Aviators found themselves playing from behind again, as McHale knocked down a smash winner to make it 3-1 for New York at the change of ends, and later rifled home a backhand passing shot to bring up three more set points. While she missed the next return and Jurak then fired an ace to make it 4-4, it was McHale who once again delivered for the visitors; a fine backhand volley winner on the deciding point to put an end to the most dramatic set of the night, and pulled New York to within 19-15.

With New York looking to extend the night, six fairly uneventful holds of serve began the mixed doubles event. With the match locked at 3-3, two well-struck backhands from Jurak helped the Aviator side hold her serve — and although the Empire held a game point on the Irigoyen serve to send the set into yet another tiebreak — some dogged defense on the 3-3 point from Jurak led to Skupski missing a volley into the net and give the Aviators the win, 5-3 and 24-18 overall.

The Orange County Breakers dominated from start to finish on home court on Friday night, winning all five sets to hand the Washington Kastles their second straight defeat, 25-10. After sprinting out to a 4-0 lead and serving for the bagel set, the Breakers‘ men‘s doubles team of Dennis Novikov and Scott Lipsky were pegged back to 4-2, only to close things in the next game and set the tone for the evening.

Two more 5-2 sets gave the Breakers a 15-6 lead at the halftime break, as Nicole Gibbs dominated Madison Brengle, the league‘s leader in women‘s singles, and Novikov defeated Kastles sub Bjorn Fratangelo by the same margin. Out of the break, a dominant showing followed for Lipsky and Alla Kudryavtseva in mixed, as they lost just two points on serve to win the set 5-1 over Ken Skupski and Andrea Klepac and move the score to 20-7. Despite a late slip from 4-1 up, Gibbs and Kudryavtseva made it a clean sweep for the Breakers in women‘s doubles, as they broke for the set 5-3 to give the Breakers a big victory.

After Springfield handed Philadelphia its first loss of the season on Thursday night at Villanova, the Freedoms hit the road with a little revenge on their minds as they take on the Lasers on their home court.

Former Top 10 player Ernests Gulbis makes his Mylan WTT debut for the San Diego Aviators against the Washington Kastles, as the defending champions look to end up on the right side of the scoreboard after losing their last two matches.

After falling to San Diego on Friday night, the Empire head to Orange County to take on an in-form Breakers squad that‘s won its last two matches.