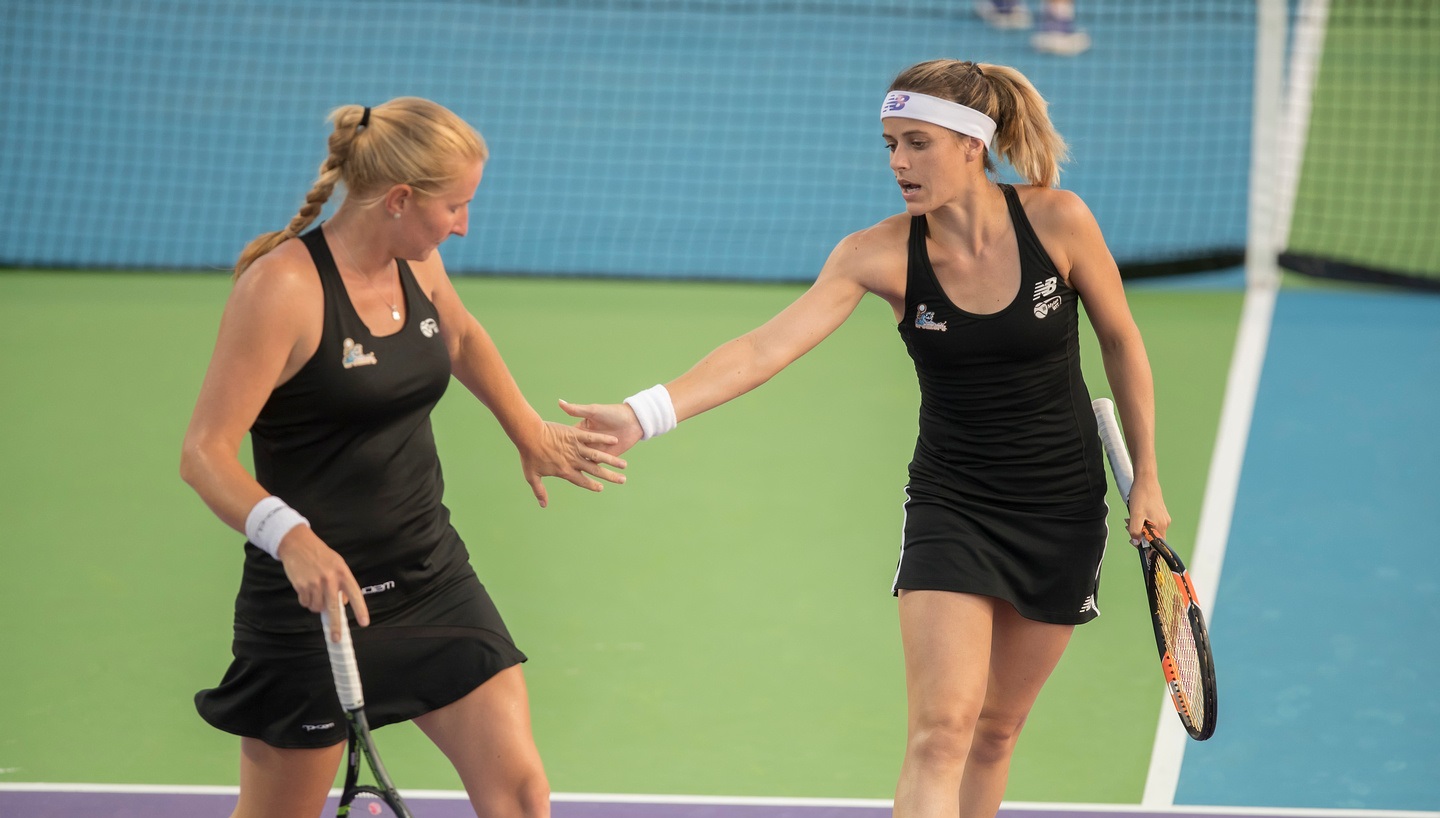 With nothing to separate them over the first four days of the 2016 season, the Orange County Breakers and San Diego Aviators each depart their head-to-head series at 2-2 overall. The Breakers claimed a 21-19 victory on Wednesday night in the last of four consecutive matches between the California-based Mylan World TeamTennis clubs to start the year.

After the first three games of men‘s doubles went with serve, the Raven Klaasen delivery proved vulnerable, and the Breakers exploited the weakness with some cracking returns for the break to the tune of a 3-1 lead. In the next game, the Aviators took both their allotted GEICO timeouts and held a 3-1 lead on return to get the break back, but a trio of big serves from Dennis Novikov bailed the Breakers out of trouble and got them the 4-1 lead. That proved to be the key moment of the set, as the Breakers closed out the opening set two games later to lead 5-2.

Up next in women‘s singles, Shelby Rogers played from behind for the duration of the match, as she and Nicole Gibbs traded big serves and solid baseline play from the back of the court. Her fighting qualities were on full display, however, in the tiebreak as she rallied from 0-3 and 2-4 down in the nine-point tiebreak to take the set and put the first set on the board for the Aviators. The win for Rogers marked the first time in the four-match series that one side didn‘t pocket both of the first two sets, with the Breakers having done so on Sunday and Monday and the Aviators achieving the feat on Tuesday.

In contrasting fashion to Rogers before him, Harrison broke to begin the set against Novikov and kept his advantage for first ball to last. Striking six aces, Harrison dropped just three points total on his serve to take the set by a 5-3 margin and level the match at 12-12 headed to halftime.

In the penultimate event of the night, Scott Lipsky and Alla Kudryavtseva put the Breakers ahead early in mixed doubles, claiming an early break of the Darija Jurak serve on a double fault and then holding Kudryavtseva‘s game from 1-2 down to lead 3-1. However, it was the Aviator pairing who finished the stronger of the two, breaking serve in the 4-3 game to send it to a tiebreak and claiming five straight points to steal the set and move in front 17-16.

There was one last turn in the match, however, as Gibbs and Kudryavtseva saved their best tennis for last. The American/Russian duo, who had dropped two of the first three doubles sets against Jurak and Rogers in the trio of matches thus far, claimed their most one-sided victory yet; saving both break points they faced, the Breakers pair broke serve three times to win the final set 5-2 and improve the Breakers to 2-2 on the season.

In three of the four meetings between the two sides over the first week of the season, the winners of the final set ended up as overall winners in the match — building a budding rivalry between the two teams that play their home matches just about an hour apart.

New York Empire def. Springfield Lasers, 19-15
The first win in franchise history for the New York Empire didn‘t come the easy way at Forest Hills Stadium on Wednesday night, but after five hard-fought sets, it came with an exclamation point.

Rookie Maria Irigoyen shined for the Empire in the second half, as she partnered Christina McHale for a 5-1 win over Pauline Parmentier and Michaella Krajicek in women‘s doubles to push the Empire in front, before joining forces with Neal Skupski to win 5-3 in mixed doubles over Krajicek and Jean Andersen to cap the historic night for New York.

The Freedoms took the first three sets of the match in close fashion, beginning with Lukas Lacko and Fabrice Martin. The two righted the ship after losing a 3-1 lead to win the final two games to lock up the men‘s doubles set at 5-3. In a mixed doubles set that could‘ve gone either way up until 4-4 in the tiebreak, it was Broady and Martin who won the final point, before Lacko defeated Kastles‘ sub John-Patrick Smith, 5-3, to give Philadelphia a sweep before halftime.

The Kastles claimed their first set of the night in women‘s doubles, as Madison Brengle and new addition Andreja Klepac, who joined the team as Anastasia Rodionova headed off to the Olympic Games, defeated Broady and Samantha Crawford 5-3. Broady quickly stamped out any chance the Kastles had to climb back into the match by handing Brengle her first singles loss of the year, 5-3 in the final set.

Springfield Lasers @ PHILADELPHIA FREEDOMS 7:00 PM EDT (Live on ESPN3)
In the lone match in Mylan WTT on Thursday, the Lasers travel to the Freedoms at opposite ends of the 2016 standings. Springfield, still in search of their first win of the season at 0-4, head into the Pavilion at Villanova University for a meeting with a 4-0 Freedoms, who sit at the top of the League.