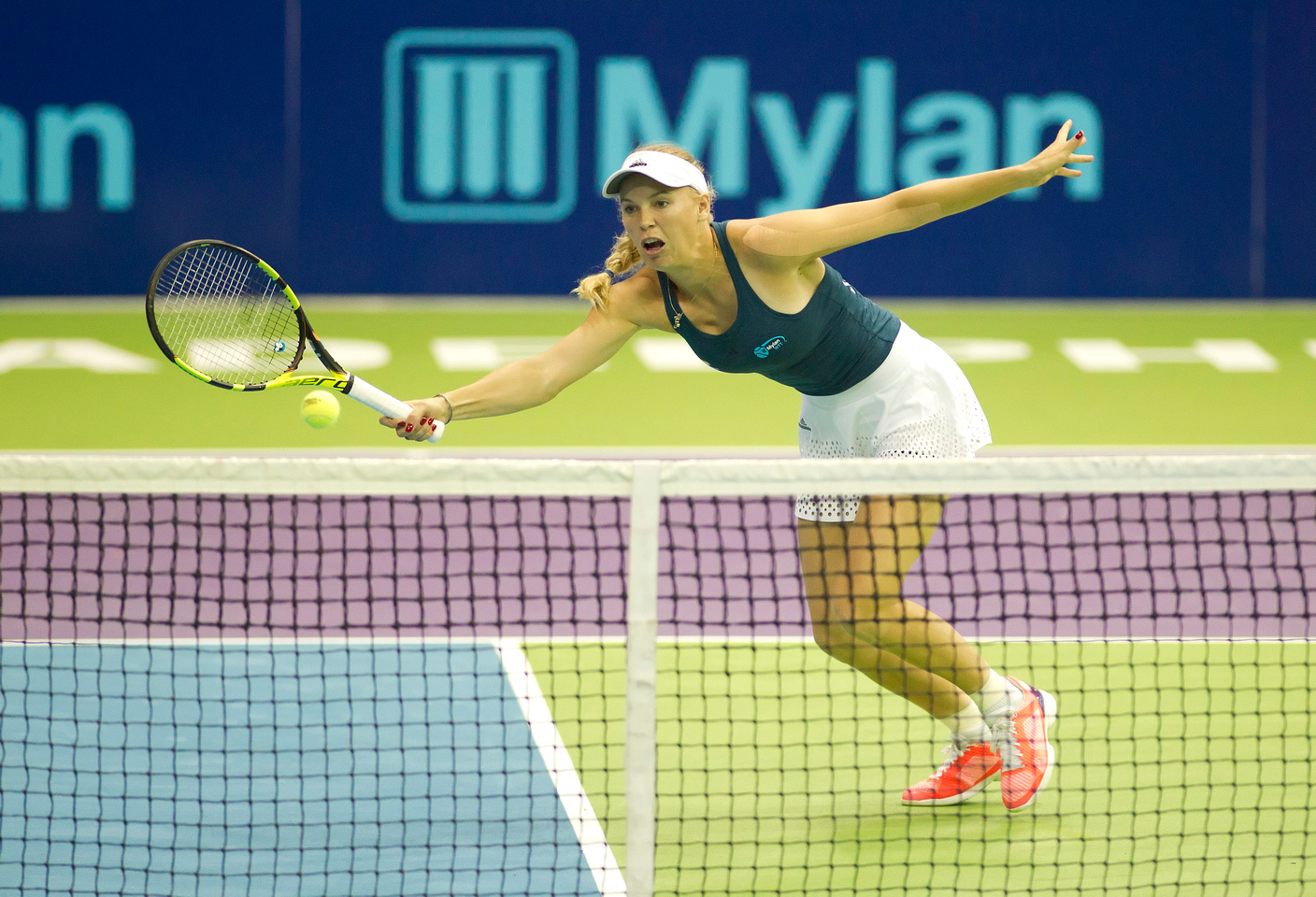 Helped in part by the singles exploits of former World No. 1 Caroline Wozniacki,  the Philadelphia Freedoms rallied from an early two-set deficit to defeat the Springfield Lasers, 20-16 at the Pavilion at Villanova University on Tuesday night.

The Lasers, looking for their first win of the season, got off to a quick start thanks to Benjamin Becker. The German, who edged Lukas Lacko in a tiebreak on Opening Night, got the better of his Slovak opponent by a break of serve this time around, winning 5-3 to put the Lasers ahead and remain perfect in singles action on the season. The women‘s doubles team of Pauline Parmentier and Michaella Krajicek, already feeling good about themselves after having scored a win over Martina Hingis and Anastasia Rodionova last night, then followed suit with a clinical display of all-court tennis to defeat Wozniacki and Naomi Broady, 5-2.

From there, the tide started to turn in favor of the home team — as it all began with serving dominance from Lacko and Fabrice Martin in men‘s doubles. The Freedoms‘ pairing didn‘t face a break point in the set, with Martin in particular serving well and hitting his spots, to take a 5-2 set and steady the Philadelphia lineup at the halftime break.

Out of halftime, Wozniacki suited up against Parmentier, against whom she is 2-0 in WTA Tour play, although the two haven‘t played on tour in four years. Nonetheless, Wozniacki knew her strategy — and picked on both Parmentier‘s biggest weapon, and her most inconsistent shot, in the forehand to draw herself both errors and short balls to attack. Surviving a couple of close calls in the next game, Wozniacki held serve after facing a pair of break points to lead 3-1, to the delight of the home crowd and the Freedoms‘ bench. She rolled from there, using her own forehand to great effect to take the set 5-1 and make it a four-game swing for the Freedoms.

Now leading 15-13, the Freedoms‘ chance to close it out rested on Broady and Martin, who duly got the first break with a hot shot off the Brit‘s forehand to lead early in the match. Although they were pegged back by the team of Krajicek and Jean Andersen, the big-hitting from the Freedoms pair was well-suited to the quick conditions inside the Pavilion; they regained control of the set late to close out the victory with a 5-3 win, and help Billie Jean King‘s signature squad move to 3-0 on the young season.

After Fish called the trainer in the opening stages of the men‘s singles set first up, Kastles captain Leander Paes was called into duty against Guido Pella. The 43-year-old doubles specialist fought valiantly, pushing the ATP World No. 49 to a tiebreak, and even leading 2-0 in the tiebreak at one stage.

Madison Brengle quickly righted the ship for the Kastles by defeating Christina McHale 5-0 in women‘s singles to improve to 15-2 in games over her first three matches of the season. After Pella and Neal Skupski edged another tiebreak — this one over Paes and coach Murphy Jensen, playing his first competitive tennis this century — it fell in part on the shoulders of Martina Hingis to lead the Kastles to another win. Out of halftime, she and Anastasia Rodionova dispatched McHale and Maria Irigoyen in women‘s doubles 5-1, before she partnered with Paes to the tune of a 5-3 win in mixed to close out the match and put another win on the board for the Kastles on a wild night in DC.

San Diego Aviators def. Orange County Breakers, 23-15
While the first two meetings between the Aviators and Breakers this season have gone down to the wire, the third of four matches between the league‘s California teams was largely dominated by the home Aviators on Tuesday, despite the Breakers‘ best efforts to rally late.

The singles matches set the tone for San Diego, as Ryan Harrison and Shelby Rogers proved to be too much for Dennis Novikov and Nicole Gibbs, with Rogers reversing her fortunes from the first two nights in a stark contrast. After Harrison defeated Novikov 5-2, Rogers defeated Gibbs 5-1 for her first win in the head-to-head matchup this season, as Gibbs had won the previous two sets by 5-2 and 5-4 margins. A similarly routine 5-2 win for Harrison and Raven Klaasen followed in the men‘s doubles, and the Aviators stood with a 15-5 advantage at halftime.

The Breakers found their footing after the break, as Gibbs and Kudryavtseva beat Rogers and Darija Jurak behind three breaks of serve, 5-3, before the Russian and Scott Lipsky forced Extended Play by edging out a tiebreak in the mixed. Once there, however, the Aviators‘ team of Jurak and Klaasen claimed the first game of the frame thanks to a break of the Kudryavtseva serve to take the match, and make the season‘s head-to-head 2-1 in favor of the Aviators thus far.

Springfield Lasers @ NEW YORK EMPIRE, 7:00 PM EDT
Regardless of the winner on Wednesday night in Forest Hills, one club will get its first victory of the season as both Springfield and New York stand at 0-3.

Philadelphia Freedoms @ WASHINGTON KASTLES, 7:00 PM EDT
Conversely, Mylan WTT‘s two undefeated clubs will put their perfect records on the line at the Smith Center, as both the Freedoms and Kastles have started the season at 3-0.

San Diego Aviators @ ORANGE COUNTY BREAKERS, 7:00 PM PDT (Live on ESPN3)
After three thrilling matches to begin the season, the Breakers will look to level the series with the Aviators at two matches apiece on Wednesday night, before both California teams get a night off on Thursday as they head cross-country to face off against some new opposition.