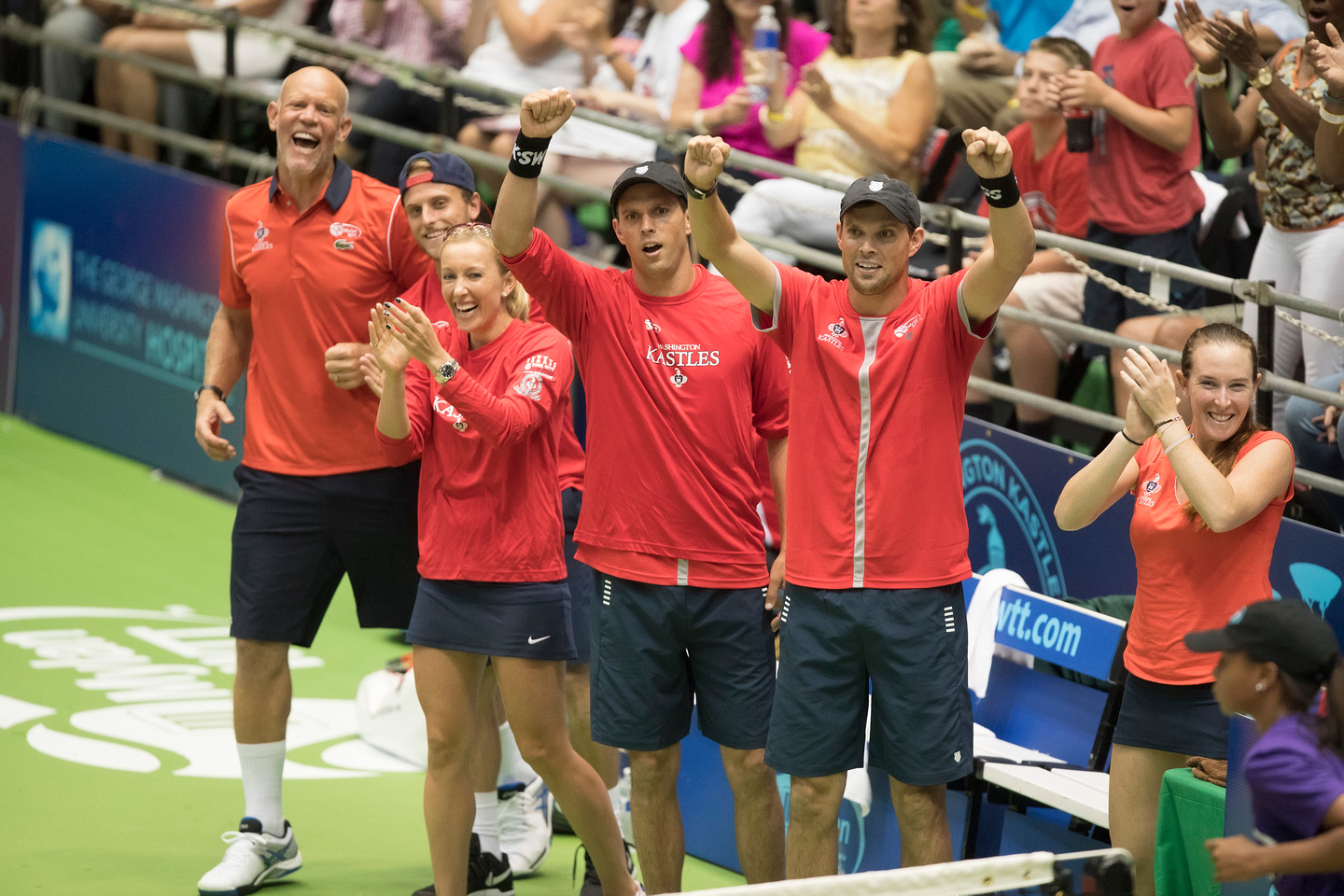 The Washington Kastles found themselves in an unusual position on Monday night: they trailed in a match at the Smith Center. When all was said and done, however, familiar  territory was restored.

Monday‘s featured match kicked off with men‘s singles, as the defending champions hosted the Springfield Lasers in front of a raucous, capacity crowd. In the opening set, Benjamin Becker of the Lasers came out firing, carving out three break points on Denis Kudla‘s serve to get things started. Although the American held serve, it was a sign of things to come — and after six straight holds, Becker secured a late break to lead 4-3. At that point, head coach John-Laffnie de Jager used a GEICO Timeout to talk things over with his player — and the wisdom he passed on clearly worked, as the German held to love to secure the first set and put the Kastles on the defensive.

Madison Brengle, who, like Kudla before her, stared down three break points in her opening service game against Pauline Parmentier only to hold serve. From there, Washington‘s fortunes changed: Brengle ran off the next four games at a canter, as Parmentier and her substitute Michaella Krajicek could do little to break Brengle‘s defenses, to take the bagel and put the home team on top.

Up next in mixed was Martina Hingis, who had her choice of partners in Leander Paes and both Bryan brothers, who suited up for the Kastles on Monday. Hingis partnered with Bob Bryan for one game and Paes for the remaining six, and the Kastles trio dropped a grand total of three points of serve to roll past Krajicek and Jean Andersen to take the lead at halftime.

Out of the break, the rookie women‘s doubles team of Parmentier and Krajicek showed off the skills that earned them each Top 50 rankings on the WTA Tour, and proved to be worthy foes for Hingis and Anastasia Rodionova. The set was decided in a tiebreak, where highlight for the Lasers came on set point; Parmentier used her quick hands at the net to volley back a smash and force an error off the Hingis racket to take the set, and keep the Lasers‘ hopes an upset still very much alive.

From there, it was closing time for the Kastles — and time for one of history‘s best doubles teams to take the court. The Bryan brothers were also offered a stern challenge from the Lasers pairing, as Andersen and Becker saved a total of nine break points in the set to take it to a tiebreak. Once there, however, the Bryans largely dominated to push the Kastles to victory — as they ended the match with a signature chest bump with head coach Murphy Jensen.

Philadelphia Freedoms def. New York Empire, 22-19 (EP)
Playing her first Mylan WTT match in 10 years, Caroline Wozniacki looked like she never left. The former World No. 1 helped the Freedoms win a pair of sets, in women‘s doubles and singles, as they survived the New York Empire in Extended Play, 22-19.

Wozniacki‘s entry into the lineup came at just the right time for the visitors, as the Empire took the men‘s singles set behind a strong effort from rookie Guido Pella. Despite losing both 3-3 points in the set, Pella dominated Lukas Lacko in the other five games to get the home team off to a strong start in Forest Hills.

By the slimmest of margins — claiming 28 points to the Empire‘s 27 — Wozniacki and Naomi Broady edged Christina McHale and Maria Irigoyen in a tiebreak to claim the Freedoms‘ first set, before Broady and Fabrice Martin brought them even at 12-12 with a 5-3 win in mixed. From there, Wozniacki put on a masterclass, dropping just five points against McHale in women‘s singles to give the Freedoms the lead, but the Empire men‘s doubles team of Pella and Neal Skupski were not about to have their side go down quietly in the final set. The Empire claimed a break advantage, which was duly erased late, but fought back from the brink and won the last three points of the tiebreak to force Extended Play for the first time this season.

The first two games in the extra frame went the way of New York, and as the Empire built a 0-2 lead on the Lacko serve, a stunning comeback looked to be on the cards. Nonetheless, the Slovak steadied and the Freedoms pair won their sixth 3-3 point in the match to take their first game in the set and secure the win.

For the second night in a row, it looked as though the San Diego Aviators were going to rally for a victory over the Orange County Breakers after dropping the first two sets — but Steve Johnson had other ideas.

The American No. 2 in the ATP rankings and 2016 Olympian stepped in to close for Orange County and defeated Ryan Harrison in a tiebreak in the final set to give the Breakers their first win of the season, 22-20.

To begin the match, Alla Kudryatvseva, Scott Lipsky and Nicole Gibbs won the mixed doubles and women‘s singles, respectively, to get the Breakers off on the right foot. After a 5-3 win in men‘s doubles for Harrison and Raven Klaasen, Darija Jurak and Shelby Rogers went up a break on Gibbs and Kudryavtseva as they looked to tie the match. Although the Russian/American pair battled back to break serve at take the set into a tiebreak, Jurak and Rogers would not be denied and won the tiebreak to close the gap to a single game.

Serving as a wildcard in Newport Beach, however, Johnson sent the fans home happy as he edged his compatriot Harrison in the final set to stem the tide and give the Breakers a big win.

Springfield Lasers @ PHILADELPHIA FREEDOMS, 7:00 PM EDT (LIVE ON ESPN3)
Wozniacki suits up for a second time with the Freedoms, who look to move to 3-0 on the season when they welcome in a Lasers team that‘s searching for their first victory.

New York Empire @ WASHINGTON KASTLES, 7:00 PM EDT
Mylan WTT fan favorite Mardy Fish makes his return to the league for the first time in three years as he joins the Kastles — his fourth WTT team — for Tuesday‘s meeting with the Empire at the Smith Center.

Orange County Breakers @ SAN DIEGO AVIATORS, 7:00 PM PDT
With the season series between California‘s two clubs even at 1-1, the two teams will meet again in San Diego for the third of four meetings to open the season.