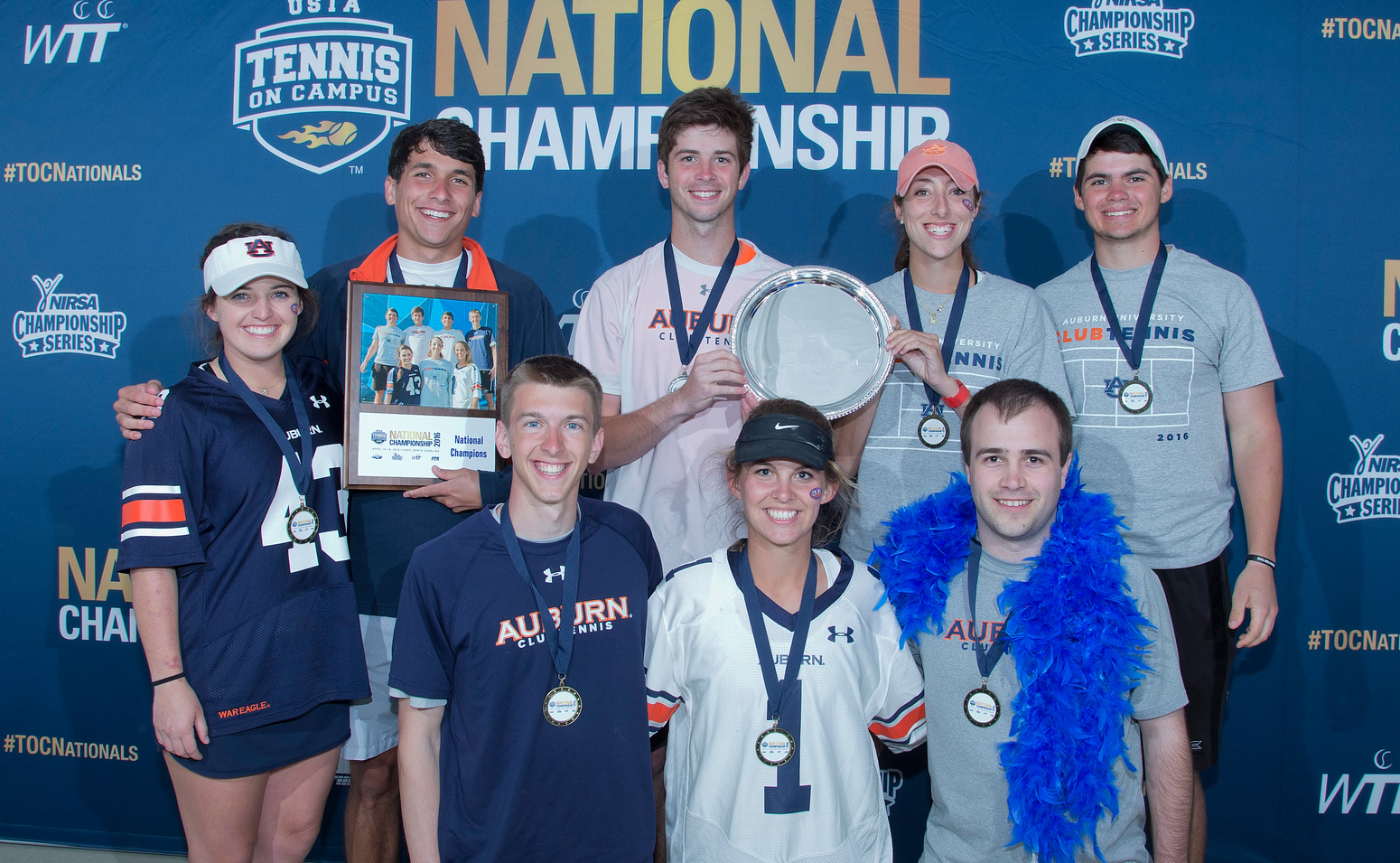 How exciting is the World TeamTennis format? Just ask the Auburn Tigers who captured their first USTA Tennis On Campus National Championship on Saturday evening with a thrilling 23-22 Supertiebreaker win over the University of North Carolina-Chapel Hill in Cary, N.C.

The Tigers rallied from a 21-17 deficit in the finals to capture the annual event which features intramural and intercollegiate coed club teams competing with the World TeamTennis format.

Down 18-15 heading into the final mixed doubles match, the Tigers tandem of Mitchell Vegas and Ashley Kitchen pulled it to within one, 22-21 by defeating the Tar Heel team of Phil Mayer and Roxanne Henshall, 6-4. Auburn won the one-game overtime by breaking Henshall‘s serve and then captured the super tiebreaker, 7-5, to claim the national title.

“Relief!“ is the one-word answer Kitchen gave to the media members when asked what she was feeling when Mayer‘s final volley fell into the net to end the match. “I was so nervous in that super tiebreaker.“

After North Carolina opened the match with a 6-0 lead with a huge win in women‘s doubles by Sarah French and Henshall, Kitchen made it 8-6 with a 6-2 victory over Alexandra Lee.

Vegas, who lost a singles match for the first time this year falling to UNC‘s Connor Cooke, 6-3, said after the match, “I knew I had to come back in mixed doubles. I needed that redemption. There are just so many emotions right now ÔÇô every emotion imaginable. It‘s too much for me to handle.“

Vegas won 13 of 14 sets over the three days with Kitchen winning all 14 of her sets, seven in singles and seven in mixed doubles.

It was one of the most exciting finals contested in the event‘s 17-year history, according to Glenn Arrington, National Director of USTA Tennis On Campus. “This was absolutely the most exciting and dynamic final we‘ve ever had,“ Arrington said. “The crowd was pumped, and no one left. Just the atmosphere and the electricity here tonight. It was a great night for tennis, and for Tennis On Campus.“

USTA Southern Section TOC Coordinator Jeff Smith was a ball of nerves throughout the entire match watching two teams from his section battle it out. “I was pacing all over,“ Smith said. “That was a match for the ages.“

“It was so nerve-racking,“ Auburn captain Christian Lyerly said. “It‘s huge for the university and huge for all these guys. It was an amazing season.“

Said North Carolina captain Henshall: “It was quite a match. That‘s the most you can ask for in tennis. That‘s playing at the highest level possible.“

The tournament was put on in partnership with NIRSA: Leaders in Collegiate Recreation; World TeamTennis, and the USTA.

Earlier in the day, the University of Florida took home third place honors as the Gators defeated Cornell University, 22-18. In the semifinals, Florida fell to North Carolina, 25-23, and Cornell lost to Auburn, 27-20, in the other semifinal.

At the Awards Ceremony, the College of William and Mary was announced as the winner of the National Club of the Year award for this season. The award is presented annually to the college or university club tennis team that has achieved a level of sustained excellence while also demonstrating a commitment to giving back to its local community. Pittsburgh senior Brian Rubin was named the 2016 Tennis On Campus National Leader of the Year and Delaware University was presented with the tournament‘s Sportsmanship Award.

The USTA Tennis On Campus program features nearly 45,000 college students competing nationwide in intramural and intercollegiate coed club play. Since its inception in 2000, Tennis On Campus has grown significantly and today is on more than 700 college campuses across the country.

Developed by the USTA in partnership with NIRSA: Leaders in Collegiate Recreation; World TeamTennis and the USTA, the Tennis On Campus program gives college students the opportunity to build leadership skills, network in a coed sports environment and compete on a college team without the rigors of playing in a varsity program.  With year-round match play, and regional and national championship competition, students maintain active and healthy lifestyles through their college years.

Visit the Tennis On Campus website at for complete results, stories and photos.