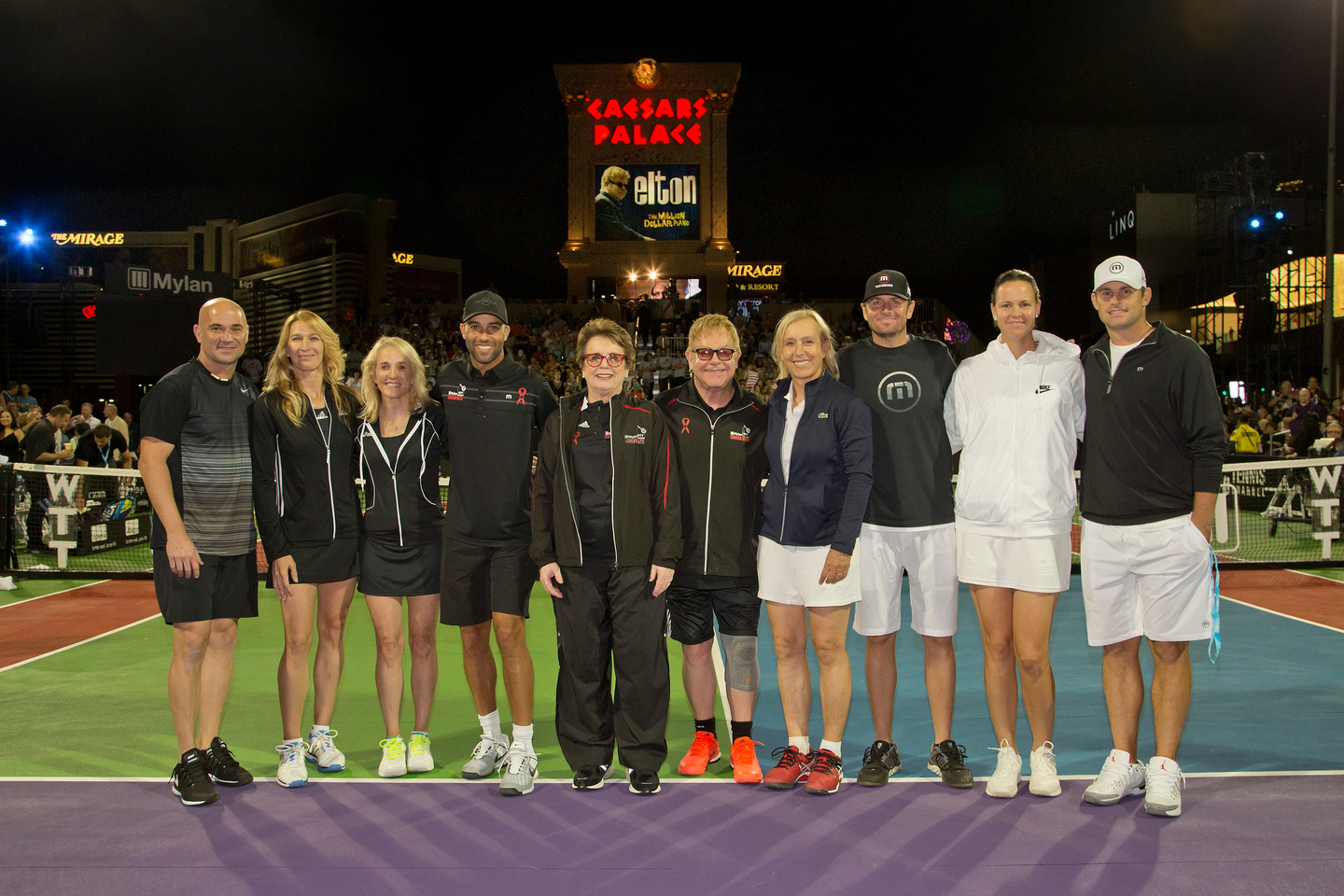 Andy Roddick defeated James Blake 5-1 in men‘s singles to lead Team Elton to a 17-11 victory over Team Billie Jean at Mylan WTT Smash Hits in front of a capacity crowd at Caesars Palace in Las Vegas on Monday night. The biggest winner was charity as, for only the third time in event history, Mylan WTT Smash Hits raised more than $1 million for the Elton John AIDS Foundation with a portion of those proceeds benefitting local charity Aid for AIDS of Nevada.

Mylan WTT Smash Hits, co-hosted by Sir Elton John and Billie Jean King, has now raised more than $14 million to support HIV and AIDS prevention and awareness programs since the first event in 1993.

The multi-colored Mylan WTT tennis court was built just steps away from where Elton John plays his hit show, “The Million Dollar Piano“ at Caesars Palace.

The evening started with all the players participating in a live auction that raised approximately half of the night‘s total. Among the top auction items was a $100,000 bid for a private hitting session with Andre Agassi and Stefanie Graf and two signed Elton John piano benches, which sold for $30,000 each.

When the action moved from the auction to the stadium court, it was Elton John who stole the show. The avid tennis player and fan teamed with longtime friend Martina Navratilova for an upset 3-2 victory over Andre Agassi and Stefanie Graf. Although the opening celebrity set didn‘t count towards the final overall score, it inspired Team Elton to a quick start in men‘s doubles.

Andy Roddick and Mardy Fish teamed together for the first time since they paired up on the ATP World Tour this July in Atlanta. The duo was too tough for Andre Agassi and James Blake as they posted a 5-3 set win for Team Elton.

A quartet of Hall of Famers took the court for women‘s doubles. Team Elton added to their lead as Lindsay Davenport and Navratilova outlasted Graf and Tracy Austin of Team Billie Jean, 5-2.

Las Vegas residents Agassi and Graf gave Team Billie Jean their first set win as they impressively took out Fish and Navratilova 5-2 in mixed doubles, but Roddick quickly regained the momentum in men‘s singles to clinch the match and give Team Elton the 12-11 edge in the all-time series.

Even though her team was on the losing end of the final score, King was thrilled with the Las Vegas debut of Mylan WTT Smash Hits. “We raised a lot of money for EJAF and left money locally for HIV/AIDS organizations. And the players come for nothing every year, so they are amazing. The crowds were so packed tonight, we had to turn people away. I loved being here at Caesars Palace but I have to live with being down to Elton now for a full year. He will be reminding me of it.“

For more information on the Elton John AIDS Foundation, visit .

About Elton John AIDS Foundation (EJAF):
At EJAF, we believe that AIDS can be beaten.  We act on that belief by raising funds for effective programs and policies, and also by speaking out with honesty and compassion about the realities of people‘s lives.  Sir Elton John created EJAF over twenty years ago, first in the United States in 1992 and then in the United Kingdom in 1993.  Through hard work and with the help of our network of kind, amazing, creative, and generous friends and supporters, the two foundations together have raised more than $321 million over the past two decades to combat stigma, prevent infections, provide treatment and services, and motivate governments to end AIDS.  The U.S. foundation focuses its efforts on programs in the United States, the Americas, and the Caribbean, while the U.K. foundation funds HIV-related work in Europe, Asia, and Africa.  Join us in speaking out, taking action, and contributing to our efforts to achieve a world without AIDS.  For more information, please visit .

About Aid for AIDS of Nevada (AFAN):
Aid for AIDS of Nevada (AFAN) provides support and advocacy for adults and children living with and affected by HIV/AIDS in southern Nevada. AFAN works to reduce HIV infection through prevention education to eliminate fear, prejudice and the stigma associated with the disease. AFAN is committed to a system that nurtures personal growth and dignity of persons served, which is emphasized during orientation, ongoing staff trainings and the culture of our organization. For more information about AFAN, please visit .

About Mylan:
Mylan is a global pharmaceutical company committed to setting new standards in health care. Working together around the world to provide 7 billion people access to high quality medicine, we innovate to satisfy unmet needs; make reliability and service excellence a habit; do what’s right, not what’s easy; and impact the future through passionate global leadership. We offer a growing portfolio of more than 1,200 generic pharmaceuticals and several brand medications. In addition, we offer a wide range of antiretroviral therapies, upon which approximately 40% of HIV/AIDS patients in developing countries depend. We also operate one of the largest active pharmaceutical ingredient manufacturers and currently market products in approximately 140 countries and territories. Our workforce of more than 20,000 people is dedicated to improving the customer experience and increasing pharmaceutical access to consumers around the world.