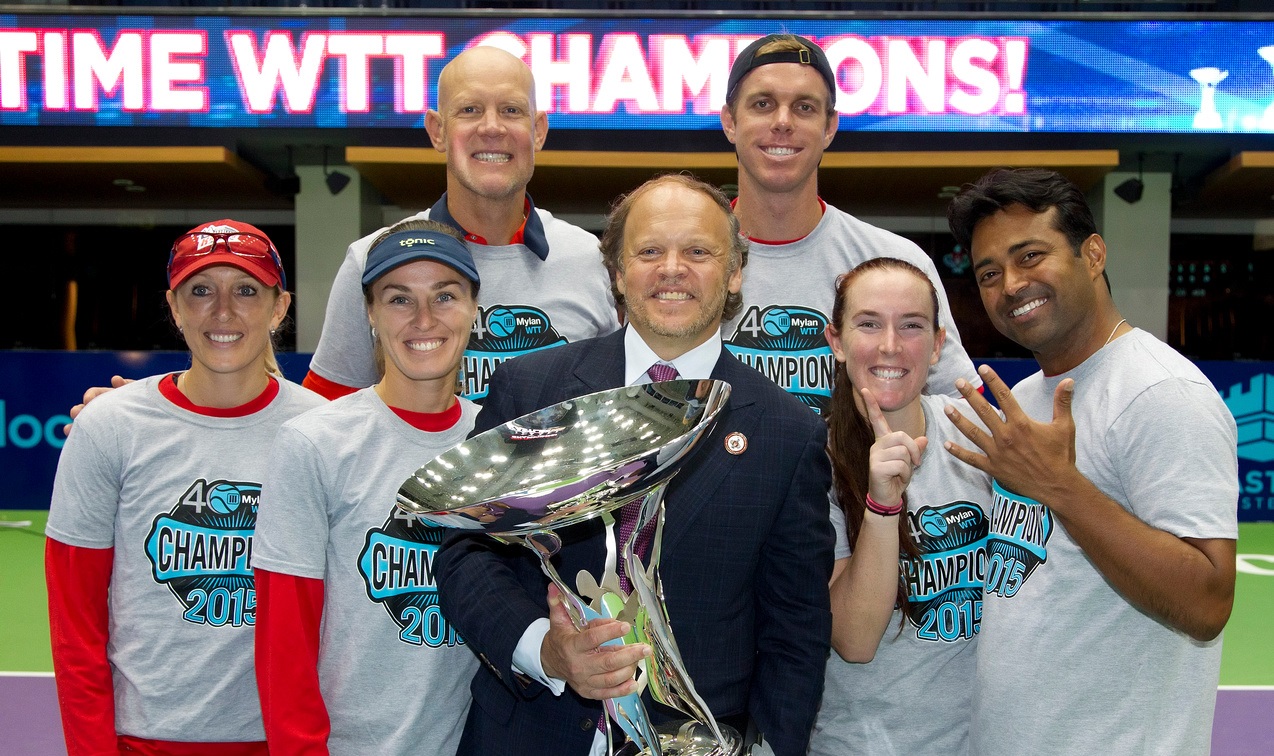 Mylan World TeamTennis‘ historic 40th season closed out today with the Washington Kastles making history of their own by winning a record fifth consecutive championship title with a 24-18 victory over the Austin Aces in Washington DC. It was the sixth overall championship for the Kastles, tying the mark set by the Sacramento Capitals in 2007.

The Kastles dominated the match, winning four of five sets. It was the sixth title for Kastles‘ captain Leander Paes who was also named the Finals MVP. “It‘s just a beautiful moment to share,“ Paes said after collecting his sixth Mylan WTT title — all with the Kastles. “I‘ve had a really long career and done some really special things, and this is way up there with the best of them. I‘d like to dedicate this MVP award to every single Kastles member, not only on the court but behind the scenes and every single Kastles fan.“

“It‘s a dream come true,“ said Kastles coach Murphy Jensen. “It‘s so different, you‘d think this‘d get old hat but it doesn‘t. It was a bigger challenge because players were coming and going during the season but to get them all to perform the way they did against an extremely tough team says a lot about our organization.“

Washington was in control of the highly-anticipated matchup between the top two teams in the regular season from the start. In the opening set of mixed doubles, Teymuraz Gabashvili and Alla Kudryavtseva reeled off four straight points to win the first game. Paes held serve to even up the match at 1-1. Martina Hingis hit a winner down the middle to break Kudryavtseva‘s serve to go up 2-1. Hingis held to give Washington a 3-1 lead before Gabashvili brought the Aces back to 2-3 with a huge service game. Paes held serve then the Kastles got another critical break of Kudryavtseva‘s serve to close out the first set, 5-2.

The Kastles boasted the top-ranked women‘s doubles team in the league and showed why early in the second set. Anastasia Rodionova and Hingis jumped out to a 2-0 lead before the Aces got on the board with a break of Hingis‘ serve. Washington broke back in the next game on Svitolina‘s serve to go up 3-1. After a break of Rodionova‘s serve, Austin evened up the set 3-3 as Kudryavtseva held serve for the first time in the afternoon. There were six service breaks in the set before Washington pulled out a 5-4 win to extend their lead to 10-6.

Washington seemingly took control of the match in men‘s doubles with an early break of serve to go up 2-1. The Kastles took a 4-2 lead on a Sam Querrey ace. Washington closed out the set 5-3 to take a commanding six-game lead at halftime, 15-9.

Querrey continued his strong play in men‘s singles with a 5-4 win over Gabashvili, the top men‘s singles player in the league, to give Washington a 20-13 edge going into the final set of women‘s singles.

World No. 20 Elina Svitolina was handed the task of bringing Austin back from a seven-game deficit against Madison Brengle. Svitolina, who beat Brengle 5-1 in their only previous Mylan WTT meeting, looked in control early on before a controversial call going against the Kastles ignited the Washington crowd.

Svitolina proceeded to fall behind a break, but broke back and, putting continued pressure on Brengle, took the first set of the day for the Aces, 5-3, and triggered Extended Play. The American has played her best tennis in 2015, however, and responded by winning the requisite game off a stunning backhand winner to clinch the historic victory.