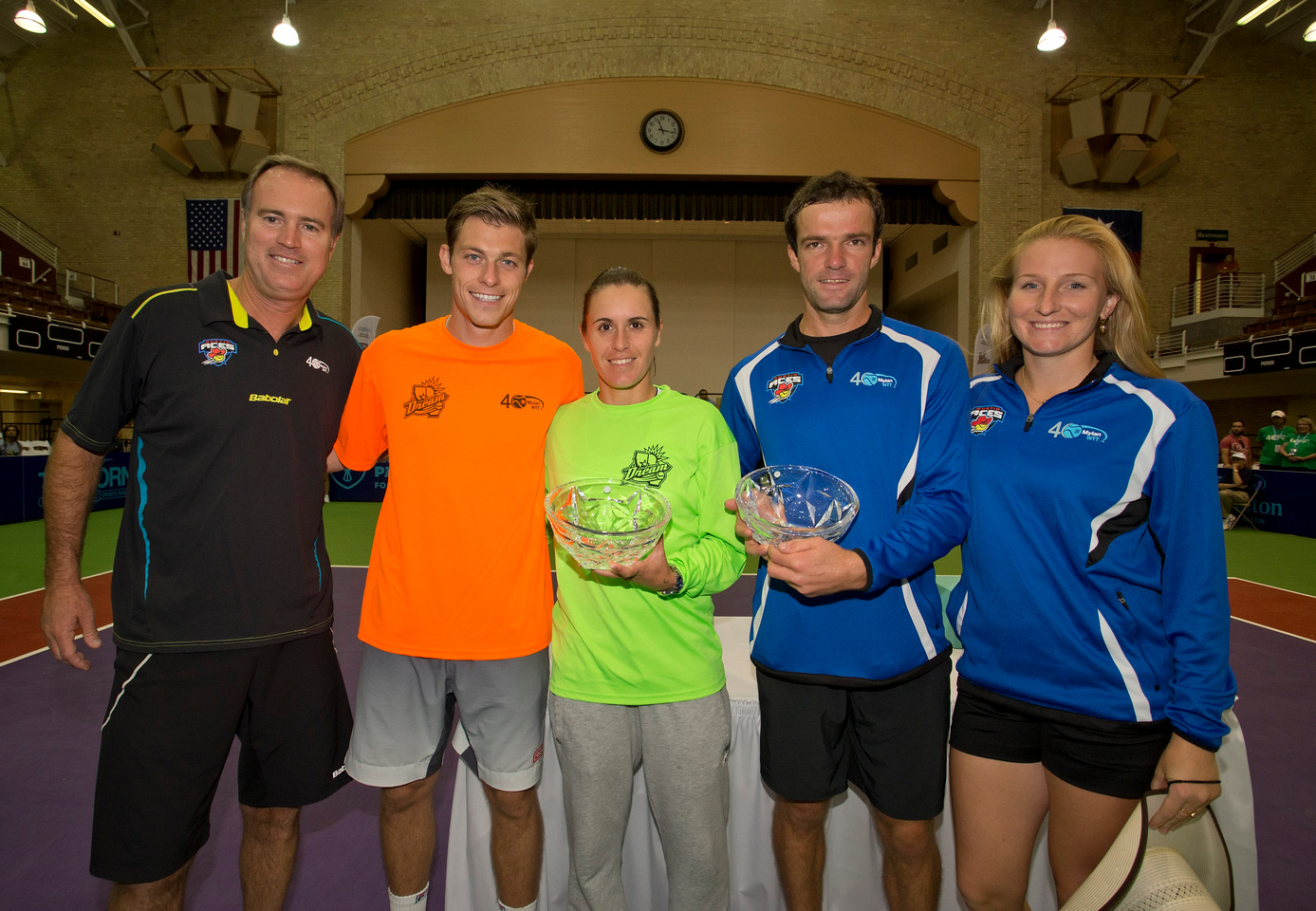 Teymuraz Gabashvili of the Austin Aces, Anastasia Rodionova of the Washington Kastles, and Anabel Medina Garrigues of the California Dream were named recipients of the Mylan World TeamTennis MVP awards, presented by Forevermark, based on their performance during the 2015 regular season. Rodionova and Garrigues were named Mylan WTT Female co-MVPs and, along with Gabashvili, will each receive a $7,500 bonus and a diamond from Forevermark, a diamond brand from The De Beers Group of Companies.

Earning Mylan WTT Rookie of the Year honors are Alla Kudryavtseva of the Austin Aces and the California Dream‘s Neal Skupski, who will each receive a $2,500 bonus.

Rick Leach, who led the Austin Aces to a league-best 12-2 regular season record, was named Mylan WTT Coach of the Year.

MYLAN WTT FEMALE CO-MVP: Anabel Medina Garrigues, California Dream
Anabel Medina Garrigues made a splash in her Mylan World TeamTennis debut in 2014, winning the Female Rookie of the Year Award with the Texas Wild. In Mylan WTT‘s 40th season, she has gone from strength to strength as part of the California Dream. The top mixed doubles player in the league, the Spaniard earned an impressive .606 record alongside Neal Skupski and the Bryan Brothers. In women‘s doubles, she is an even .500 with teammate Jarmila Gajdosova, and helped lead the Dream into the Western Conference Championship final in their first season of Mylan WTT.

“I was really surprised and happy to get this as it usually seems to go to singles players,“ said Garrigues. “I have to thank my team. We are a team, not individuals, and my teammates were there for me all season.“

MYLAN WTT FEMALE CO-MVP: Anastasia Rodionova, Washington Kastles
Anastasia Rodionova is a veteran of Mylan World TeamTennis, playing her 7th season with the professional team tennis league. The Aussie first joined the Washington Kastles in 2012, helping to lead them to three of their last four King Trophies. On board for another full season, Rodionova leads the league in women‘s doubles with an impressive .608 winning percentage in the discipline, and has the best mixed doubles record of the Kastles squad. Since regular partner Hingis rejoined the team, Rodionova has seen her stock soar in women‘s doubles, going 24-11 in four of her last six matches.

MYLAN WTT MALE MVP: Teymuraz Gabashvili, Austin Aces
Teymuraz Gabashvili had never participated in Mylan WTT before, but the Russian played a debut season Austin Aces fans won‘t soon forget. Playing all three disciplines throughout the summer, his big game clicked in astounding fashion, hitting 52 aces in 14 matches and leading the league in men‘s singles with a .612 record. With Jarmere Jenkins and Alla Kudryavtseva in men‘s and mixed doubles, Gabashvili landed in the Top 5 individually and made up the second best teams overall. Nicknamed “The Teymurnator“ by Austin fans, the Russian closed out many a tough match for his team during their eight-match winning streak en route to the best win-loss record in the league.

“It feels great to be MVP,“ said Gabashvili. “I want to say thank you to Mylan WTT for this award and I am very excited about this it. I was giving my best in every set this season and it feels amazing when such an incredible organization is honoring me. At the same time, we are not done and the most important thing for me is to win the Championship with my teammates.”

MYLAN WTT MALE ROOKIE OF THE YEAR: Neal Skupski, California Dream
Great Britain‘s Neal Skupski was a late addition to the newly-formed California Dream, but the doubles specialist has helped lead his team into the Western Conference Championship on the back of some impressive wins in men‘s doubles and mixed. Alongside Anabel Medina Garrigues, Skupski has been the best male mixed doubles player in the league with a .575 winning percentage. He also paired up in men‘s doubles with Tennys Sandgren, finishing the regular season with a .437 record.

“I‘m really pleased,“ said Skupski. “Not just for me but for our whole team. It‘s great for a doubles player to get this. I hope I can come back and play next year and maybe win the MVP.“

MYLAN WTT FEMALE ROOKIE OF THE YEAR: Alla Kudryavtseva, Austin Aces
The Female Rookie of the Year is another doubles expert in Alla Kudryavtseva. The Russian first made her foray into Mylan WTT as a substitute for the Washington Kastles in 2013, but in her debut season as a roster player, Kudryavtseva has been a force to be reckoned with in women‘s and mixed doubles. With Nicole Gibbs and Elina Svitolina, she amassed a .521 record but has been even more impressive in mixed with Teymuraz Gabashvili and Jarmere Jenkins, rounding out the Top 3 winning percentages with a .573 record. Kudryavtseva has thrived in the Mylan WTT atmosphere, engaging with fans and dancing her way into the Aces‘ first Western Conference Championship.

“Playing Mylan World TeamTennis this year has been one of the best experiences of my life,“ said Kudryavtseva. “Getting the Rookie of the Year Award was definitely the icing on the cake. Aces and Mylan WTT fans are so fantastic. I am glad I was able to contribute to this amazing team we had and I want to thank Nicole, Jarmere, Elina, Teymuraz, coach Leach and owner Lorne Abony for letting me be a part of this team.“

MYLAN WTT COACH OF THE YEAR: Rick Leach, Austin Aces
Rick Leach is a 14-season veteran of Mylan WTT, first as a player and now as a coach for the Austin Aces. Leach has led the Aces to a 12-2 regular season record — the best of all seven Mylan WTT teams. Leach has one prior King Trophy, won in 1996 as part of the St. Louis Aces, but while he is appreciative of the recognition, the four-time Mylan WTT coach believes all credit belongs to his team.

“This is the first time in my life I have received any award for coaching,“ Leach confessed. “This really means a lot to me! I owe it all to my team, who performed at the highest level throughout the entire season.”

NOTE: To be considered for regular season awards, a player must compete in 80% of their team matches.