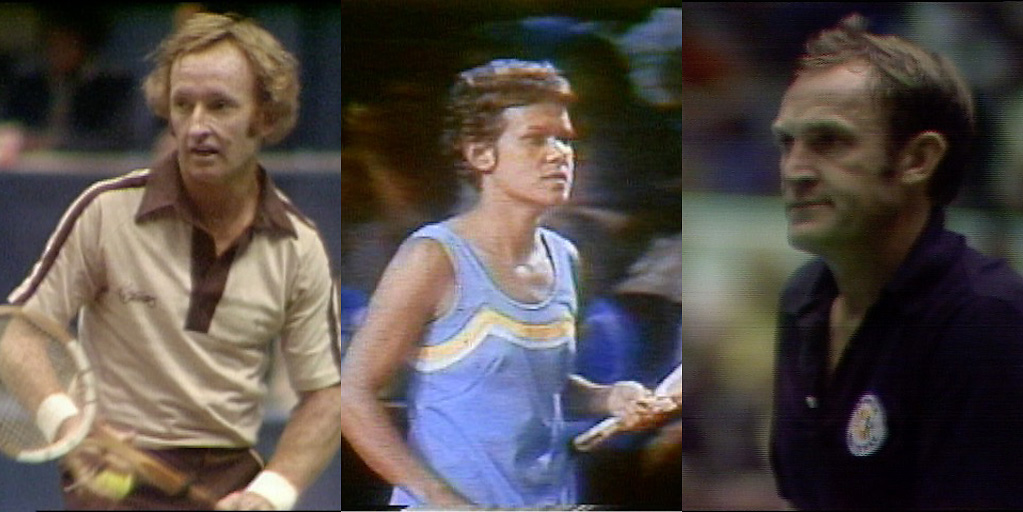 When Billie Jean King needed help turning tennis upside down, she looked no further than a band of elite players from Down Under. Australian tennis was arguably at its peak during the 1970s, but something that linked these greats together — besides their Grand Slam trophies — was that each enjoyed a tenure with Mylan World TeamTennis.

King has clear memories of that auspicious opening night, with the Aussie contingent at the forefront of her mind.

“When we played our first match, it was the Philadelphia Freedoms against the Pittsburgh Triangles at the Spectrum,“ she told wtt.com. “I remember how much fun it was as far as the excitement that we were actually going to start the WTT league. The Pittsburgh Triangles had players like Evonne Goolagong, Ken Rosewall, and they had a line-up that was amazing.“

After a long and decorated career — in which he won eighteen Grand Slam titles (eight in singles, ten in doubles and mixed) — Mylan WTT was the icing on the cake for Ken Rosewall.

“At the age of 40, I had the opportunity of joining the Pittsburgh Triangles team and I though it was more time for me to spend with the family,“ the Aussie said during this year‘s Australian Open.

The Triangles were a tough team in the advent of Mylan WTT, boasting a formidable line-up that included Vitas Gerulaitis, Peggy Michael, and Gerald Battrick in addition to Goolagong and Rosewall.

“There was good camaraderie, and we thought we might have won the competition [in 1974] but unfortunately not.“

That honor went instead to the Denver Racquets, a team that featured another esteemed Aussie in Tony Roche. The 1966 French Open champion, Roche had most of his success in doubles, winning 13 Grand Slam titles in men‘s doubles and two more in mixed. Roche believed the Aussie mentality, with its focus on Davis Cup, was crucial to its players‘ early Mylan WTT success.

“I decided to play because I liked the idea of being part of a team. Obviously growing up in Australia, playing Davis Cup was very important, and I enjoyed that format. All the top male players decided to play and I thought, ÔÇÿWhy not?‘ It would be great to experience that.“

In the Mylan WTT Finals, Roche played the role of player/coach in taking on King‘s Freedoms, coached by compatriot and rival Fred Stolle. Denver claimed a stunning upset to become the first-ever Mylan WTT Champions, but Roche‘s favorite memories involve the time spent with his teammates — in particular, Fran├ºoise Durr, a fellow French Open champion and Roche‘s mixed doubles partner.

“She used to travel with her dog called ÔÇÿTopspin,‘ and she had Topspin trained to carry a racquet out on the court when she got introduced. Frankie used to run out and then Topspin would bring her racquet out for her!“

Glory would come to Pittsburgh one year later, however, and though Rosewall had left the team in the off-season, Goolagong was there to help the Triangles raise the King Trophy in 1975.

“We always had great crowds every night, we had great support,“ she recalled this past January.

Placing second in women‘s singles and doubles that season, the Aussie credited the professional team tennis league with not only making her a better player, but also with making her the best in the world.

“By playing WTT, it actually helped my game because I think it made me a lot quicker on the court. I was able to become No. 1 in ÔÇÿ76 and playing WTT had a lot to do with that.“

Goolagong came into the league with good friend Peggy Michael — with whom she won the Wimbledon women‘s doubles title in 1974 — but echoed the sentiments of her compatriots, having never forgotten the friendships she forged during those three seasons.

“I loved WTT because of the people you meet. One of the special friends that I had met was Vitas Gerulaitis; unfortunately he died later on after that but he was always so funny. He had the Vitas G-Men always supporting him every night, a real character, and an awesome teammate.“

Joining the league in 1976 was another history-making Aussie in Rod Laver. The last man to win a Calendar Year Grand Slam in 1970, Laver enjoyed the fast-paced format of a Mylan WTT set, something that perfectly suited his energetic game.

“It‘s obviously a shorter version of what we played and I found myself being able to play quite well for 30-40 minutes and that‘s one of the reasons why I enjoyed it.“

Playing against Laver in that 1976 season was a fellow Calendar Year Grand Slam winner in Margaret Court, who was a two-time member of the Hawaii Leis. Court grew up training with Laver and the two felt the importance of a team dynamic from an early age.

“ÔÇÿRocket‘ and I have always been good friends. I think I was very fortunate because Harry Hopman, who was the captain of the Davis Cup team, saw that I had a lot of potential and he used to let me train with the Davis Cup boys, and that was Rod, and Roy Emerson, Fred Stolle and all of those guys. He‘d make you train until you dropped and then he‘d say, ÔÇÿGo for a five mile run!‘ I think he knew I loved all of that, and I worked with those guys and we all became very good friends.“

Playing for the Leis, Court remembers needing to adapt fast, especially when it came to transitioning from the pristine courts of the All-England club to the high-energy environment that Mylan WTT still has today.

“You‘d just come from Wimbledon, which was very sedate and very quiet, and all of the sudden you‘re into Team Tennis and the noise and the music and fans yelling ÔÇÿfoot-fault!‘ or ÔÇÿserve a double!‘ and it was a shock to me when I first did it. I played it for a few years, and so you got used to it after a while and it was a great team event.“

Court‘s team never captured a King Trophy, but through all of her on-court accomplishments, the Aussie came away with the spirit of what it means to no longer play for yourself, but for your team.

“With that particular team, I think we were all friends. There was another young Aussie girl in there, Helen Gourley at the time, and I always got on well with John Newcombe, I had my husband with me, and I‘d had a baby at that time. It was a very family environment and we had a lot of fun with it.“

Even as a next generation of impressive Aussies begins their rise, the mark left by the last — as individuals and as teammates — can still be felt 40 seasons later.