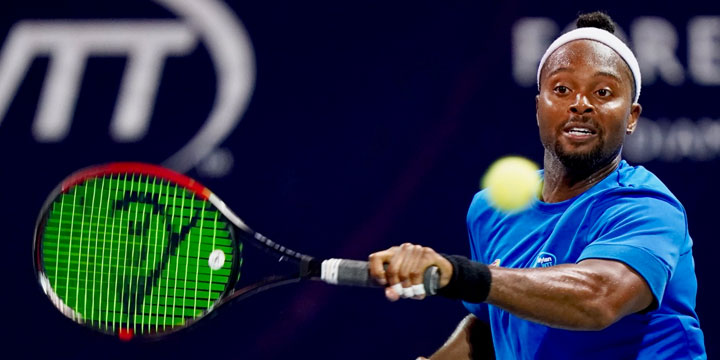 ORLANDO, Fla. – The Philadelphia Freedoms topped the Orlando Storm by a score of 24-19 on Thursday to win their fourth match in a row while Orlando has lost their third straight after a 2-0 start to the season.

“It was a very touch-and-go match,” said Philadelphia head coach Craig Kardon, “It looked like we were in control but we really weren’t. I mean, it was great tennis all the way around; I don’t think anybody choked or played badly, it was just a matter of real good, solid tennis.”

Storm head coach Scott Lipsky elected to shake up the order of play after his team had dropped two straight matches. The night began with women’s doubles as Darija Jurak and Whitney Osuigwe faced off against Taylor Townsend and Raquel Atawo. Orlando got the first game but saw Philadelphia take the next three. The Storm got the pivotal fifth game in a deciding point to trail by just one, but Philadelphia proved to be too much, taking women’s doubles by a score of 5-2.

Women’s singles saw a much tighter contest, as Orlando’s Osuigwe went toe-to-toe with Townsend of Philadelphia. Townsend got the chance to serve first and picked up a nice hold. Osuigwe answered back with a hold of her own, evening the set at 1-1 with a 40-0 victory. The two continued to hold serve all the way through eight games, forcing a tiebreaker. In the extra session, the two traded the first four points. From there, Townsend took three of the final four points, to win the set 5-4 (5-3) and put the Freedoms ahead 10-6.

“Townsend and Osuigwe have played each other many times,” said Kardon, “Taylor and Whitney know each other’s games really well, so they produced some really good rallies and it was a lot of fun to watch.”

A pair of heavy hitters were up next as Feliciano Lopez squared off against Donald Young in men’s singles. The two stayed on serve for the first four games before Young earned the only break of the set. He held serve after the break to win his third straight game and controlled the pace from there, winning men’s singles 5-3 and taking a 15-9 lead into halftime for Philadelphia.

Mixed doubles started heavily in favor of the Freedoms as Atawo and Fabrice Martin took three straight games to begin the set. Orlando and Philadelphia traded the next two games to take a 4-1 lead, but Orlando came storming back. Jurak and Ken Skupski strung together three consecutive games of their own, including winning the eighth game on a deciding point to force a tiebreaker. The first four points were split evenly, but after the side change, Philadelphia took control and won the next three points to win mixed doubles 5-4 (5-2).

With a commanding 20-13 lead, Philadelphia sent out Martin and Young to try and get the five-set sweep as they were matched with Orlando’s Skupski and Lopez. The Freedoms earned a break in the first game and then added an additional game with a win on deciding point. At that point, Orlando put their foot down and began to make a comeback. They won their next three games to take a 3-2 lead. Philadelphia held serve in the next game and were hunting for a break up 0-40 in the seventh game of the set. Skupski and Lopez came all the way back to win the game and go up 4-3. They sealed the set by winning another deuce point to win 5-3 and snap an 11-set winless streak.

Because the Storm won the fifth set, the match went into extended play, meaning the Storm needed to keep winning games until they could tie it up. If they could do that, they would play in a super tiebreaker. Orlando held serve and won their first game, but fell in the second one, ending the match with a 24-19 victory for the Philadelphia Freedoms.

“We lost all our sets last night, to get that last set tonight was good, especially since we play them tomorrow,” said Lipsky. “Hopefully we can carry that momentum into the next match and there will be some motivation to beat them and not lose two matches in a row to them.”

This was the first time that Orlando head coach Scott Lipsky has changed the order of play this season.

The Storm had not won a set since their third match of the season on July 16 when Evan King and Ken Skupski won their men’s doubles match 5-3 against the Springfield Lasers. Men’s doubles was the third event that evening, which means the streak of winless sets stood at 11. In the fifth set of tonight’s contest, Skupski and Lopez broke that streak with a 5-3 win.

Orlando will be away from home for six days as they return home on Wednesday for the home stretch of the season.

Another big crowed showed up for the Orlando Storm’s fourth home match of the season, halfway through their home campaign.

These two teams will hop on a plane and head to Philadelphia and play their second consecutive match against each other as they are back in action Friday, July 19 at 7 p.m. Eastern. Watch live on ESPN+ or WTT.tv or follow along on WTT.com/schedule or at orlandostorm.com. The Storm will return home once again on Wednesday, July 24 against the Washington Kastles.